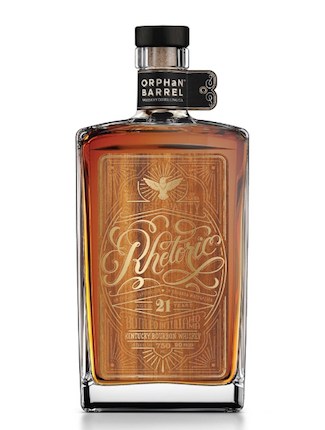 I’m not very good at finding “finds.” I don’t have the patience for wandering through yard sales, flea markets, or antique shops. I don’t usually see the good in the old, I just see the old. I need my fine things curated.

Diageo’s Orphan Barrel Rhetoric 21-Year is good for lazies like me.

According to their website, the Orphan Barrel Whiskey Company was started to share “barrels of rare and delicious whiskey, hidden away and nearly forgotten in the back of rickhouses and distilleries.” Each bottling is done by hand in Tullahoma, Tennessee, and once it’s done, it’s done.

As we mentioned earlier, the Rhetoric is an “experiment in maturation,” and gets released annually to compare aging over the years. “ About the 21-year: “Aged in charred American oak barrels for one year longer than last year’s 20-Year-Old release, this rich, complex bourbon represents an exciting evolution in the progressively aged Rhetoric series.”

Diageo plans to release the last Rhetoric in 2019—year 25. The bourbon stocks for this line reportedly “were found at the Stitzel-Weller Distillery in Louisville, Ky. The bourbon was distilled in 1993 at the Bernheim Distillery historically located at 17th and Breckenridge in Louisville, while owned and operated by United Distillers.”

Although the flowery prose on their website—Rhetoric is described as “speaking a language to which you could listen for hours”—seems like it was written by a laid-off J.Crew catalog writer, and although I wore my skeptic hat (did they really find this in some dusty corner somewhere?), I approached the Rhetoric with an open mind and an empty glass.

The Rhetoric appears like a medium-bodied beer or cherry wood color. The nose is also cherry, with vanilla and fruity notes, like banana or another tropical fruit. On the palate, the vanilla continues, and the rest is smooth, clean-tasting and very easy-drinking. There’s a slight spice on the finish, but it doesn’t stick around too long. It is very light-tasting, but not insubstantial. It won’t weigh you down. In fact, it brought to mind the “less filling/tastes great” debates of the ‘80s…in the best possible way.

It’s 90 proof and retails for about $129 if you want to try and hunt down a bottle for sale online. It’s not a cheap one, but they don’t have you over a barrel. Everything about the Rhetoric is smooth and mellow, easy to drink, and pleasant throughout. For that I give it a 91. You get what you pay for.