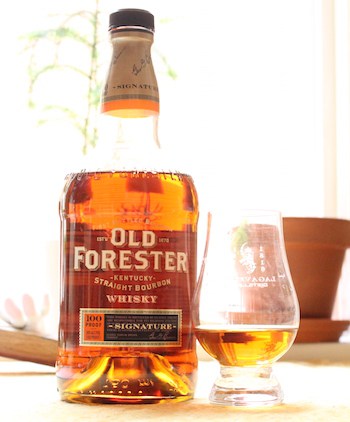 Old Forester, although typically considered to be yet another bottom shelf brand fading into the din of “The Olds” (Old Grand-Dad, Old Overholt, Old Crow, etc.), has gained some notoriety in recent years. Myth has it that Old Forester remains the longest selling bourbon on the market to date at approximately 144 years strong, however that 144 years has not been free of its bumps in the road.

Disappearance of many other of “The Olds” in this time has been a warning for those remaining Olds to step into the global whiskey market more boldly as a means of preservation. One such bold Old step was the usurpation of Early Times as the official whiskey of the Kentucky Derby by Old Forester. Although both spirits are housed under the Brown-Forman Corporation, the switch to Old Forester was one the Derby publicized as a hail to a more traditional Mint Julep, as Old Forester is a bourbon, while Early Times technically is not. Although its image has been buffed up recently, the spirit remains the same—another in a long line of older whiskey brands hurdling headlong into the future rebranded but bottling the same whiskey as always.

Medium-dark amber in hue, and slightly lighter in the glass, Old Forester Signature 100 Proof looks formidable from first glance. Heavy ethanol on the nose, so much so that at first sniff the back of my throat began to hurt, gives way to a sour, acrid quality that may be contributed to the relatively high rye content in Old Forester (purportedly 18%), or its 50% ABV. After opening up, the nose imparts overwhelmingly sweet oak.

Certainly jarring on the nose, Old Forester jars again on the palate with the same sourness. Cheap maraschino cherry notes follow, enveloped almost instantly by a burning spice and heat that feel neither satisfying nor balanced. The cherry combined with heavy ethanol, spice, and a certain nuttiness lend to the construction of sort of fruitcake-left-in-front-of-the-fireplace-on-Christmas-eve flavor. With no finish to speak of, Old Forester leaves only the sensation of heat in the back of the throat.

An experience that is over in a blessedly short amount of time, Old Forester does not live up to the hype. Drinking Old Forester may be an American pastime, but it will not be one I’ll willingly engage in again anytime soon. That being said, there are rougher “Olds” out there, and at approximately $22 a bottle Old Forester could be doing worse.

For its relatively reasonable price combined with lacking, unbalanced nature, I would give Old Forester Signature 100 Proof a score of 75.

97
Shares
2.2k
Views
Share on FacebookShare on TwitterGet Our Newsletter
Cheers to the Dads! Personalize a bottle of his favorite whiskey to create a modern gift for the modern man. Use code: FATHERSDAY20 for $20 off your next order of $100 or more at ReserveBar