This year’s highly anticipated release of Old Forester Birthday Bourbon comes in at 97 proof (48.5% ABV), and is the first release to be the product of more than one set of hands.

Normally, the birthday barrel selection process is done by the master distiller, but this year Old Forester’s global brand ambassador had a hand in the process. Current Master Distiller Chris Morris and Brand Ambassador/Bartender Jackie Zykan paired up to select the 2016 barrels which, as always, were the product of one distilling day. This year’s release was distilled on June 4th, 2004, and celebrated the 15th anniversary of the now iconic release.

This Birthday Bourbon release pays homage to the storied history of Old Forester and Brown-Forman, but that is not the only significance of this release. Just as Old Forester Birthday Bourbon was one of the first premium bourbon releases, the inclusion and championing of a woman in this year’s selection process marks another milestone for the brand. 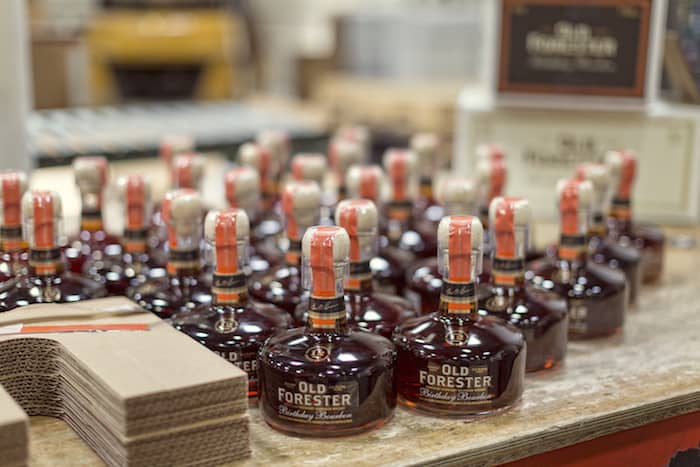 Appearance: The Birthday Bourbon looks to be a pretty standard golden brown in the glass.

Nose: Sharp, yet perfumed on the nose, the dram combines a strange array of scents. Nail polish remover, gardenia, and hay begin. After some time, the bourbon’s expected corniness appears, alongside barnyard and salty bagel chips.

Palate: Pretty pleasant for Old Forester, and certainly better than last year’s release. Sweet and lovely, with apparent age. Refined without losing its edge, the Birthday Bourbon punches through with crunchy breadsticks and corn water. A slight saltiness really brings out the savory elements of the dram. Altogether, the whiskey has me craving a crunchy snack or a yummy pile of cured meats. Complex, salty, and with depth of flavor. Very slight leather and chewiness. Very well balanced.

This year’s Birthday Bourbon release shows both the history of Old Forester in the limited release bourbon world, but also how the brand sees itself in the future: upholding tradition while striding forward into the future. Morris and Zykan have created a particularly delicious bourbon together, and appear to be quite the team.

In our recent interview with Zykan, the powerhouse ambassador encourages consumers to find what works for them, explaining that “If you aren’t enjoying the spectrum of flavors in the bourbon you’re drinking, then why drink it? They’re all very different though, so try different products and find one that fits you.” It is clear that Zykan is among the new wave of ambassadors aiming to create real connections between people and their booze, and not another catch-phrase spewing brand robot.

Overall, I was impressed but not blown away to bits by this bourbon.

Score: 89/100 [SHOP FOR A BOTTLE OF OLD FORESTER BIRTHDAY BOURBON]

222
Shares
491
Views
Share on FacebookShare on TwitterGet Our Newsletter
Cheers to the Dads! Personalize a bottle of his favorite whiskey to create a modern gift for the modern man. Use code: FATHERSDAY20 for $20 off your next order of $100 or more at ReserveBar