Old Forester has been continuously produced in the United States since 1870, even through Prohibition, when it was marketed as a medicinal product. That makes Old Forester the longest-running bourbon brand on the market today, one more reason to celebrate a birthday with this limited edition release. 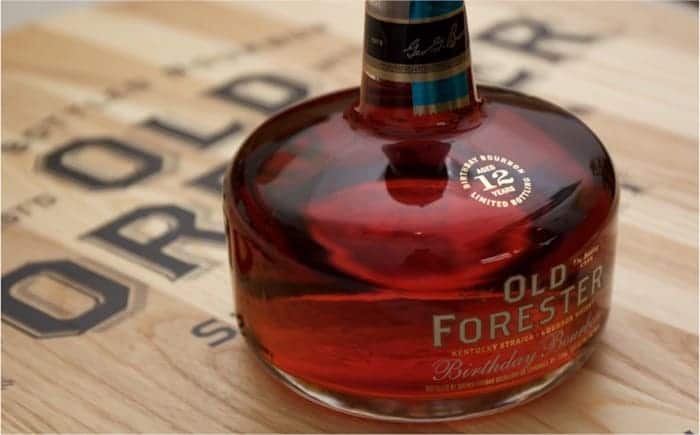 This year’s Birthday Bourbon was made on June 13, 2003, and aged in a single warehouse for all 12 years. It’s also bottled at 100 proof, which is a bit higher than years past. We recently covered some unique aspects of this whiskey’s aging regime, including a location near a heat cycling duct and a window that exposed the barrels to exceptionally high temperatures and encouraged the formation of wood-forward characteristics.

The bourbon presents in the glass as having a dark, warm amber color with orange undertones. My tasting notes for it are below:

Nose: The 2015 Birthday Bourbon has a big, bold aroma with tons of herbal, spice, and wood-influenced notes. Initially it’s quite vaporous and oily with a hit of wet paint, but that quickly dissipates to reveal intense maple, caramel, and cola notes as well as a pronounced geranium herbaceous note. With water, there’s more fruit in the nose, including some nice green grape and apple.

Palate: The boldness of the aroma is echoed in the palate. It’s quite bitter, but the bitterness is more medicinal than tannic, much like an Italian amaro or coffee beans. That’s balanced by burnt orange peel, caramel, root beer, and a modest but detectable sweetness.

This is a bit of a challenging whiskey – intense, bitter, rugged, oaky, but also complex and delicious. If you’re looking for a bottle, get ready for a hunt: only 2,200 cases of this are being released in select markets.

I find the Old Forester 2015 Birthday Bourbon to be an interesting and engaging powerhouse of a whiskey at pretty good value that’s worth a score of 89 points. You can try to hunt down a bottle of it for sale online here.