In a short amount of time, Old Fitzgerald’s decanter-style bottles topped with bottled-in-bond tax stamps have become distinctive mainstays on just about any well-stocked whiskey bar. Three years ago, Kentucky’s Heaven Hill Distillery began issuing semiannual spring (green label) and fall (black label) releases of the Old Fitz bourbon. The glasswork is beautiful, and the juice inside has been consistently well-regarded even as the age statement changed with each new release.

The spring 2021 bottling is the seventh in the series, and comes with the youngest age statement yet – eight years. That also makes it more affordable than previous releases, at least initially. (Often, the Old Fitz Bottled-in-Bond ends up costing more on the secondary markets than MSRP would lead you to believe.)

The Bottled in Bond Act of 1897 was originally approved because the feds were concerned about so much fraudulent hooch being sold in the country. They wanted a new way for buyers to know they were getting what they were paying for in a whiskey bottle during those largely unregulated pre-Prohibition days.

Under the law, bottled-in-bond bourbons had to be distilled at a single distillery in a single distilling season, aged at least four years in a warehouse certified by the government as legitimate, bottled at 100 proof, altered with no additives other than water and provided with labels that included specific product information. Bottles came affixed with a tax stamp to show their bona fides under the law.

These days, when food safety is less of a concern and few of us are keeling over from drinking unregulated moonshine, the bottled-in-bond designation is more of a curiosity than anything else. The requirements to use the phrase are largely the same as they were in 1897, but the significance of the claim is a lot less meaningful.

It does, though, offer a tie to whiskey’s history in the United States. That makes it a good fit for the Old Fitz Bottled in Bond releases, since Old Fitzgerald is a brand first registered in 1884, later sold to Pappy Van Winkle and reacquired in 1999 by Heaven Hill. Old Fitz doesn’t release its mash bill, but it continues to be a wheated bourbon in a similar style to Pappy’s or Weller. 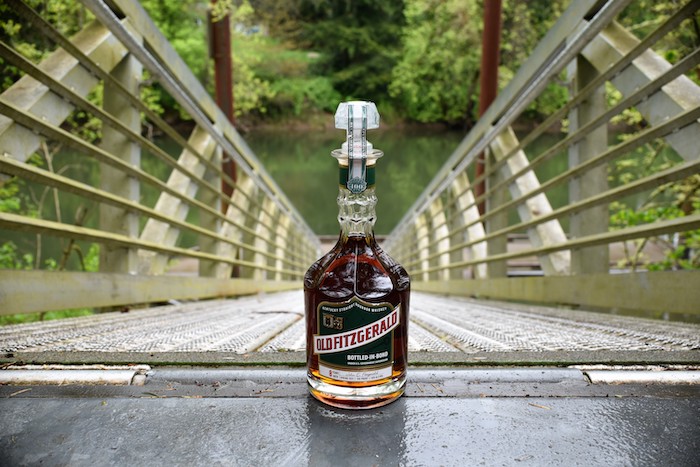 Color: Dark copper, in the classic Old Fitz decanter-style bottle. There’s some structure in the liquid, suggested by the legs that hold up well on the side of a glass.

Nose: Brown-sugar cookies and classic bourbon sweetness, with notes of maple and honey. Underneath, though, you find the fruitiness of warm apple pie with a sprinkling of cinnamon on top. See a theme developing? In short, this smells like dessert in a glass.

Palate: Rich and sweet butterscotch. It settles quickly in the back of your throat, leaving a hint of brown sugar. This is nice bourbon, and tastes like a good Kentucky bourbon should. But it doesn’t have layers to unpack like some of the more complicated whiskies you might find elsewhere. What you taste right up front is what you get, and it doesn’t linger long.

I had previously tasted the spring 2019 Old Fitz 13-year-old, and came away impressed. So I certainly looked forward to giving the latest bottling a once over for The Whiskey Wash. I was impressed again this time, though admittedly a bit less so. That might be the difference between a 13-year bourbon and an 8-year bourbon, of course. This one was just a little bit less complex and a little bit more straightforward. Regardless, it’s good whiskey and it comes with a laudable pedigree and a beautiful bottle. If you can find it at the MSRP, I’d recommend adding this one to your shelf.