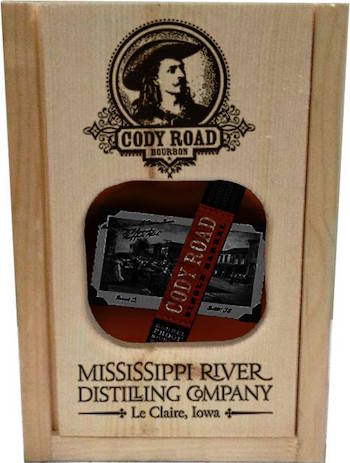 Back in October, Mississippi River Distilling Company (LeClaire, Iowa) offered up an aged, single barrel incarnation of its Cody Road Bourbon to celebrate the distillery’s fifth anniversary. This is the stuff they kept in their under-sized barrels twice as long as usual—and exactly what I wished for after tasting their standard, 90 proof bourbon, which I found unique and enticing for its fresh, wheaty flavor, but noticeably under-aged.

But this extra-aged version is an entirely different beast. It offers a primer on the way aging and barrel blending affects taste. After a single sip, it’s difficult to believe that this could be even a distant relative of the standard Cody Road bourbon I reviewed earlier. Whereas the latter is bright, sweet, and grassy, this single barrel version is pure fire. The spice and oak is overwhelming (for better or worse, depending on your preference). Due to its high alcohol content, it burns from tongue to gut. And thanks to an extra year of aging in half-sized charred oak barrels from Minnesota, it fills the sinuses with ginger and maple, as if granny dropped a bottle of rubbing alcohol in her gingerbread cookies.

If this sounds like your cup of booze, you face one glaring problem: how to get your hands on it. There’s very little information to be found online and only 125 bottles were produced. I called the distillery and spoke with Ryan Burchett, one of the two brothers who run the show at Mississippi River Distilling Company. He offered two pieces of exceptionally good news. First, there are indeed still Cody Road Single Barrel Bourbon bottles available—and you can even order them online from Binny’s Beverage Depot or South Lyndale Liquors. Second, we can expect more such bottles to be produced in the future as well as a new surprise: single barrel rye.

Nose: It’s hard to smell anything beyond alcohol and smoke on first (and second) sniff.

Palate: For the first second, it tastes like any high-proof bourbon. Then the spice hits you—and stays with you. Perhaps forever. Tastes of red chutney, baked ginger snaps, and pancakes with maple syrup. A la flambé. Ice mellows it out a bit and introduces a hint of cane sugar.

Finish: More burning than tingling from mouth to stomach, but leaves a pleasant zing in the back of the throat. The ginger aroma lingers in the sinuses.

As is the case with Cody Road Bourbon, this one’s not intended for the novice whiskey drinker. It’s a long way from your mass produced middle-shelf whiskey. Like experimental art, your enjoyment of it depends a great deal on whether you’re thrilled by quirky innovation or turned off by it. If you like the idea of a distillery producing small quantities of a product whose ingredients are all sourced locally, but secretly hope that it tastes just like a familiar bottle with Diageo on the label, you’re in for a disappointment. But if you’re looking for a surprise, this will certainly tickle your fancy.