Editor’s Note: This whiskey was provided to us as a review sample by Heaven Hill. This in no way, per our editorial policies, influenced the final outcome of this review. It should also be noted that by clicking the buy link towards the bottom of this review our site receives a small referral payment which helps to support, but not influence, our editorial and other costs

It releases others through the Larceny brand – the flagship Larceny Small Batch and, starting in 2020, three annual releases of Larceny Barrel Proof. Heaven Hill refers to the Larceny lineup as, “the modern heir of our historic wheated mashbill, known behind-the-scenes at our distillery as ‘O.F.D.’ or Old Fitzgerald Distillate. The recipe bears the name of bourbon legend John E. Fitzgerald and his vaunted Old Fitzgerald brand, which was sold to famous whiskey man Pappy Van Winkle… Today the Fitzgerald name — and its reputation — endures.”

Heaven Hill’s marketing team likes to remind everyone that the distillery sold its original wheated bourbon recipe to Van Winkle during Prohibition. Pappy’s went on to become one of the rarest and costliest whiskies in the world – which explains why Heaven Hill leans into the story. Heaven Hill bought back the rights to Old Fitzgerald in 1999, and began using the Fitz approach to distill what became Larceny Small Batch starting in 2012.

Later came Larceny Barrel Proof, which didn’t take long to announce itself on the scene — its second bottling (from May 2020) earned Whisky Advocate magazine’s designation as the most exciting whiskey of the year. With an MSRP of $49.99, it’s an affordable and approachable entry into the wheater sub-category of bourbons.

The release that earned Whisky Advocate’s praise was B520 – which stands for the second (B) batch of the year, released in May (month 5) of 2020. I hadn’t been quick enough to snag any of the initial Barrel Proof releases, so I reached out to a collector friend who lives a couple of hours away and has more than 200 bottles on his shelves. I wanted to compare the B521 release I was reviewing for The Whiskey Wash with at least one earlier bottle, as well as the flagship Larceny Small Batch.

Ultimately, I met the collector and we shared a flight of Small Batch, A121 Barrel Proof and the B521 Barrel Proof I have. For fun, we also threw in the Old Fitz Bottled in Bond from this spring as a sibling Heaven Hill wheater for purposes of comparison.

We spent a warm summer evening at a private backyard bar nosing, tasting and debating the various bourbons, and taking notes about what we thought of each. We were looking for the signature taste profile from Heaven Hill, as well as distinctions unique to each release.

I went back later along with those notes to conduct two additional tastings of the B521 batch to clarify my thinking. The results are below. What I was reminded of as much as anything, however, is that whiskey is best when shared, discussed and enjoyed among friends. A warm summer evening doesn’t hurt, either. 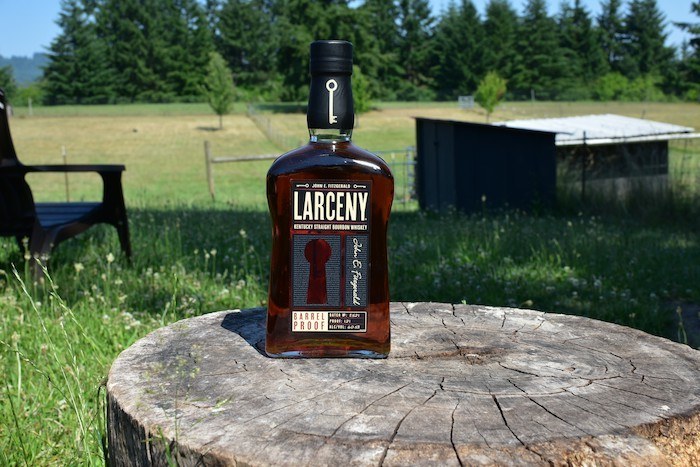 Appearance: The color of gingerbread; significantly darker than the flagship Larceny Small Batch.

Nose: Cinnamon, banana bread, caramel and, unexpectedly, Orange Julius. It’s as if there’s something spicy and citrusy going on, but something else creamy and smooth over the top – thus, the Julius reference. At 121 proof, it helps to let the ethanol evaporate a bit before sticking your nose deep into the glass.

Palate: You get spiciness immediately, with nutmeg and cinnamon. The second wave is deeper and richer, bringing to mind tobacco, leather and hazelnuts. The finish is medium to long, tingling on the front of the tongue with vanilla and apricot.

The distinctive Larceny bottles commemorate John E. Fitzgerald, who as a treasury agent in the late 1800s and early 1900s was one of the only people legally allowed to carry keys to the rickhouses where whiskey barrels were aging. Old man Fitzgerald would likely be happy with the Larceny lineup today. The B521 Barrel Proof, in particular, is an affordable bourbon that manages to be sophisticated enough for collectors and serious drinkers. Interestingly, I found the B521 batch smoother and more “wheat-like” than the A121 and significantly more than the Small Batch – despite it’s higher alcohol content. It can stand next to the Old Fitzgerald Bottled in Bond release and hold its own, which is high praise in my book.