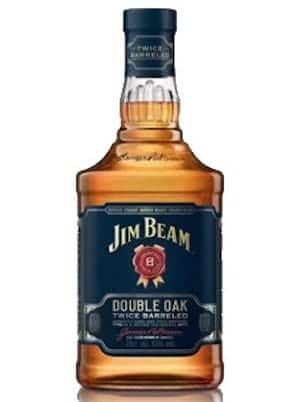 Jim Beam has done notably well in offering unique variations on their traditional bourbon at a price point that even the likes of a whiskey reviewer can afford. In particular, their Black Extra Aged (née Double Aged) bottling was a welcome addition to the lower shelves of your liquor store’s bourbon display. So it was with great anticipation that, earlier this year, The Whiskey Wash announced that Beam would soon introduce a twice barreled bourbon—and, sure enough, a bottle of Jim Beam Double Oak is now in my hands.

Notice first that the label does not read “double wood,” which would indicate a more common process in which a spirit is aged in one sort of barrel and then matured in a different sort (usually an oak barrel and then a wine cask) to add another layer of complexity to the flavor profile. No, not this time—this is “double oak.”

The idea is simple: age nascent bourbon distillate in charred white oak as usual, then rinse and repeat in a new, freshly charred oak barrel. Without the rinsing, of course. In other words, the standard Jim Beam Kentucky Straight Bourbon—same mash bill, same four-ish years in oak—takes a second barrel-ride for an undisclosed period of time. Maker’s and Woodford have utilized similar techniques to great effect.

You’d expect very intense oak flavors—it is, after all, a rather puerile experiment, like those corn chips with “extreme” flavor additives or, I don’t know, a young gearhead who thinks that if six cylinders are good, twelve must be twice as good. But there is—perhaps thankfully—an issue of diminishing returns. Yes, this bourbon is full of oaky goodness, but not twice as much oak flavor. It’s a lumber slugger for sure, but don’t expect it to taste like the syrupy distilled wood you cooked up in middle school science lab.

Appearance: Copper. Unmistakably darker and rustier than the white label.

Palate: Dry enough to suck the moisture out of your mouth. Vanilla and anise mid-palate. Dehydrated cherry is the closest thing it offers to fruitiness. Very woody, as expected, with notes of char and licorice. Long, papery finish.

A drop of water reveals corn and maple syrup flavors, sweetening the deal—and that comes as a relief. I tend to kvetch that so many bourbons are too sweet, but in my best Goldilocks impression, I find this one too dry. It’s unique and certainly not bad, but rather one-dimensional. Then again, it might be just the thing around a fire pit on a chilly autumn night.