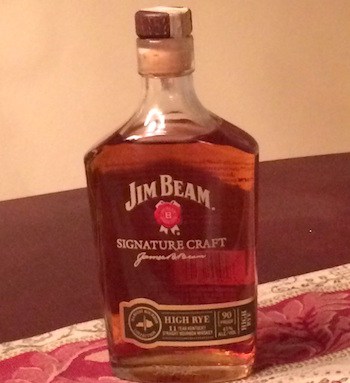 The Jim Beam brand is a king among bourbon, well known even to people who are not interested in whiskey. Famous and even legendary for the superiority of its products and the illustrious history of its company, the distillery has operated under the leadership of seven generations of the Beam family since 1795 in Clermont, Kentucky, with business interrupted only by Prohibition. The company began under the name Old Tub, and sold its first barrels of whiskey in 1795. It became the James B. Beam Distilling Company in 1935, and was acquired by Japanese alcohol conglomerate Suntory in 2014.

One of the most prestigious and expensive whiskies the distillery has produced of late is the Jim Beam 12 Year Old Signature Craft whiskey, bottled at 86 proof. The time required to age it is longer than almost all of the other Jim Beam whiskies, and the final result is a bourbon of unmatched palate vigor and diversity.

The color is relatively dark and rich amber, and once it is poured out, one can breathe in the palpable oak and sweet corn scents. The effect is immensely alluring.

The years have definitely had the desired effects on the whiskey; the taste is intense and lengthy to a unique degree, with deep hints of oak, cinnamon, and vanilla in the palate. Further along, the taste reveals strong spicy and woody notes that are powerful but never overwhelming. Everything is balanced well and immediately inviting. A shorter amount of time spent aging would have resulted in a weaker taste.

The sensation over the tongue is sharp but pleasant, and the aging has helped unlock sweet tanginess and piercing bitterness in the oak. Experienced Jim Beam drinkers will notice how much more vivid the palate has become, while retaining its full-bodied character. Despite the lengthy amount of aging time, the oak does not emerge as the only noticeable flavor. The burn is decent and pleasurable.

The cost of one bottle may reach 40 dollars – and that might intimidate some people – so this is ideally recommended for longtime fans of Jim Beam who are willing to spend more than usual to try this drink. The bottling is sturdy and dignified, representative of the high level of standards Jim Beam sets for itself. Once again, the distillery has raised the bar for bourbon, and remains the brand to beat in the bourbon community.

I give the Jim Beam 12 Year Old Signature Craft Bourbon a rating of 95.

Derek Sun hails from hot and dry Los Angeles and currently enjoys living in cold and rainy Portland. He taught himself to appreciate whiskey through many glasses and a few hangovers, and is always trying out new drinks around the world.