Here’s how Jefferson’s explains their experiment: they took four-year-old straight bourbon whiskey and aged it in one of 13 different experimental aging environments, from toasted extra-large barrels to standard charred bourbon barrels with stave or cube inserts. Afterwards, the spirits were bottled in 200ml bottles and packaged in sets of five, with a seemingly random selection of five of the 13 different experiments in each set. Mine came with Nos. 3, 4, 8, 10, and 12. 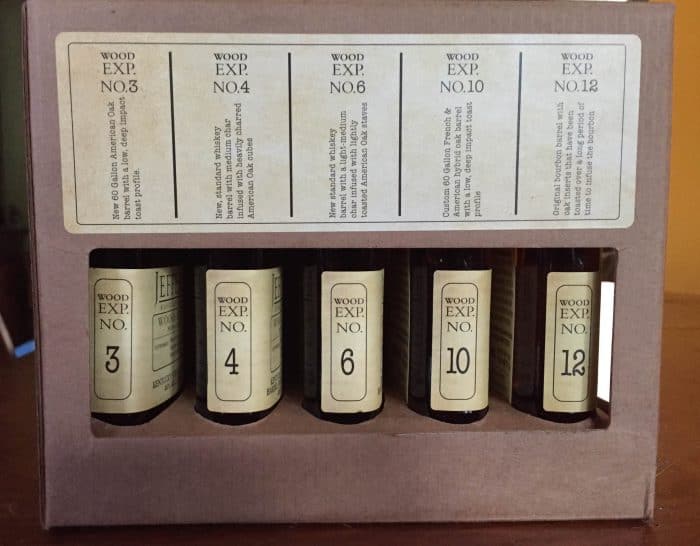 So how long did the spirit rest in those novel aging environments? “Over a period of 32 months, we charted the characteristics of each experiment monthly and analyzed how the different treatments have affected the outcome of the final whiskey.”

You’ll note that Jefferson’s doesn’t say specifically that each spirit actually spent all 32 of those months in its respective aging environment, and some may in fact have been pulled well before then. But perhaps the part of me that cares about such minutia is nothing more than a cynical quibbler in need of a good drink.

So let’s get on with it. Tasting notes follow, as well as rankings from one (best) to five (worst)

Caramel and perfume on the nose, with notes of soap, cola, sourdough bread, laminate hardwood, and something a little funky/meaty. A little sweetness upfront on the palate, but otherwise it’s lean and dry, with notes of soapy lavender and sour corn in the finish. There’s a lingering burn in the tannin-heavy finish.

Cherry and fizzy cola in the nose again (a Jefferson’s signature) as well as caramel cake, menthol, and freshly split wood. The palate brings creamed corn, more menthol, green wood, and corn milk as well as strong tannins. There’s a lingering tartness and slight clove note in the finish.

Some familiar notes in the nose here: cola, caramel, creamed corn, cereal grain, vanilla, and root beer. There’s another touch of that meaty/sulfury funk, as well as a nice honeyed element. The palate is kind of weird – spicy cola, nuts, cinnamon, and nutmeg combine for a vivid spice cake-like effect. The finish is very warm and dry, but in an enjoyable way.

A very sweet and earthy nose, with notes of cola, fruit leather, and rich caramel. The aroma feels much more in focus, like eating a full-fat muffin after the Snackwell cake of No. 3. There’s lots of cola in the palate, as well as coconut, caramel, ash, cherry, sarsaparilla, and a bit of numbing clove in the sweet, somewhat ashy finish.

A green/fruity nose, with notes of sapling, grape and cherry soda, cola, white peach, and ozone. The palate is the sweetest of the bunch, driven by flavors of peach, almond, marzipan, light caramel, vanilla, and a hint of menthol. The finish is short, tart, and slightly cooling.

As a person with a stronger-than-average interest in the technical aspects of distilling, this was an interesting exercise in oak influence on the same initial spirit, reminiscent of Big Bottom’s Bourbon Barrel Experiment release of four differently aged sourced bourbons in its Warehouse Series.

However, to me, the moral of the Jeffersons Wood Experiment story is this: bourbon barrels are best for making bourbon. None of these were an improvement over the standard practice. Call me a traditionalist, but I prefer the classic sweet-smoky flavor and smooth funk of the ol’ #3 char to anything else.