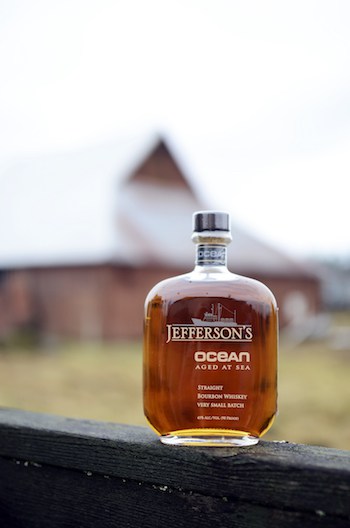 When Jefferson’s Ocean: Aged at Sea bourbon first splashed on the scene in 2012, aging bourbon on an ocean-bound ship seemed a preposterously novel idea. In a Food Republic article on the matter, Jefferson’s Bourbon co-founder, Trey Zoeller, aged three barrels of Jefferson’s bourbon on M.V. Ocean for four years while the crew traveled the Pacific Ocean tagging sharks for research.

The four-year experiment revealed that temperature fluctuations, salt water air exposure, and constant motion of the ship created a unique flavor profile for the bourbon. Due to these conditions, Jefferson’s describes the results as a dark bourbon, with caramel flavors reminiscent of a dark rum, and a briny, savory flavor due to the salt-water air that resembles an Islay Scotch.

Following the success of the initial release, Jefferson’s grew the Ocean product line beyond its humble three-barrel beginnings. Now, Jefferson’s commercialized the process by shipping hundreds of barrels around the world.

For a typical barrel, Jefferson’s states that the barrel crosses the equator at least four times and visits over 30 ports on a voyage. With the increased volume, Jefferson’s makes periodic releases of Ocean bourbon, and some bars and high-end liquor stores even carry single barrel selections (including some cask strength releases).

While Jefferson’s entered a deal with Kentucky Artisan Distillers in 2015, Jefferson’s traditionally sources its bourbon from different distillers. With that in mind, some releases of Jefferson’s Ocean include the Kentucky straight bourbon designation, while other releases, such as the subject of this review, include only the straight designation (no Kentucky reference). Moving on to the important issues, let’s see how Jefferson’s Ocean batch number 14 holds up.

Vital Stats: The subject of this review, Jefferson’s Ocean batch number 14, clocks in at 90 proof. As mentioned above, this batch carries only the straight bourbon designation, so it is safe to assume that at least some non-Kentucky bourbon found its way into this batch. Jefferson’s Ocean retails for $80 to $90.

Nose: Since Jefferson’s sources bourbon, the mash bill is unknown. However, the nose for this particular batch lines up with rye grain recipe bourbon with strong floral notes that balance with salted caramel. While I initially chalked up Jefferson’s claims of similarity to an Islay Scotch to marketing fluff, there is certainly a soft salt and light smoke note mixed with the caramel that I cannot recall encountering in any other bourbon.

Palate: Further supporting my suspicion that this particular batch of Jefferson’s Ocean includes mostly rye grain mash bill bourbon, the front of the palate leads off with floral notes, citrus notes, and a light black pepper spice. In the mid palate, those flavors taper off and the bourbon sweetens with caramel driving most of the flavor. Similar to the nose, soft salt and smoke combine with the caramel, and the finish tapers off with a light dry note of oak combining with the predominant caramel.

To me, the nose seemed to give off more of the possible characteristics derived from aging the barrels at sea than the palate. In addition, the smoke and salt notes were more pronounced upon opening a fresh bottle. After sitting in the glass for 15 minutes, those notes seemed to diminish.

Overall, the process behind Jefferson’s Ocean certainly makes this a unique product. However, whether the process creates a different flavor profile is up for debate. At best, I think the sea aging process adds a touch of salt and smoke complexity that usually doesn’t appear in bourbon, but those notes are very subdued.

With all that in mind, certainly give Jefferson’s Ocean a try if you see it at a bar. However, if you’re interested in the flavor profile noted above, look for a cask strength release, as that will likely have more pronounced characteristics derived from the sea aging process.