If anyone knows anything about my palate, or has read even a fraction of my reviews, then they know of my undying love for and obsession with corn.

Corn is a key driving force of the American whiskey industry, commodity agriculture, and my will to live. The potential for alternate corn variety use in whiskey appears to be endless, something my recent Blue Corn Bourbon feature highlighted.

The American whiskey industry has spread its wings beyond the standard grains, and ventured into triticale, millet, brown rice, quinoa, buckwheat, and even sorghum. Whether or not all of these grain variants fit into the TTB’s legal definition of whiskey, or even the American public’s definition is whiskey, is beyond me to say. 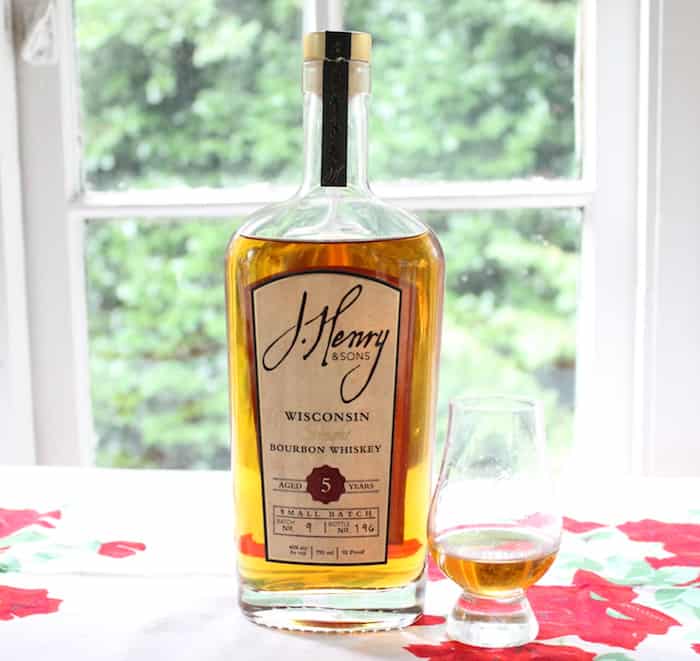 However, the fact that the craft whiskey scene is rife with creativity and innovation is a boon to drinkers everywhere, no matter which way you slice it. A shining example of this trend is J. Henry & Sons out of rural Wisconsin. The Henry family has been farming their now 900 acre property since 1946, and produces all of the heirloom red corn, wheat, and rye for their whiskey on site. The small amount of barley used in production comes from another farm in the state.

The five year aged whiskey, which is distilled off-site for them by another craft distillery, rests in an old dairy barn, with no temperature control to speak of. This means that brutal the midwestern weather has full sway over the aging liquid, from subzero temperatures in the winter to significant humidity and broiling heat in the summer. More on the farm can be seen in this quite sweet video made by a local news station.

Palate: Soft, pleasant mouthfeel from beginning to end, with a burst of tannin beginning mid-palate and following all the way into the finish. Damp wood shavings, peach cobbler, and cracked black pepper on corn muffins begin the palate. The cracked pepper melts into vegetal freshness, with both sweet and hot peppers leading. Jalapeño honey cornbread is the final impression.

A round of applause for modest Midwestern farmers crushing the craft whiskey game. Elegant, unique, and with a pleasing diversity of favors, J. Henry & Sons is a craft bourbon worth seeking out. The use of heirloom red corn speaks to my love of both corn and alternative grains, and the quality of production honors the grain appropriately.

Additionally, this Midwestern whiskey has all of the flavors that would perfectly suit Southern food!

201
Shares
3.9k
Views
Share on FacebookShare on TwitterGet Our Newsletter
Get The Macallan® Rare Cask at ReserveBar. Shop now!