Editor’s Note: This whiskey was provided to us as a review sample by Proof and Wood Ventures. This in no way, per our editorial policies, influenced the final outcome of this review. It should also be noted that by clicking the buy link towards the bottom of this review our site receives a small referral payment which helps to support, but not influence, our editorial and other costs.

Until it closed in 2015, the Idle Hands Bar in New York’s East Village made no bones about its metal-music roots or its desire to be known as the best whiskey bar in the city. Its menus and signs declared the mission unabashedly: “Bourbon. Beer. Rock.” Its bar, meanwhile, included dozens of bourbons.

“It had good selection and knowledgeable staff back when most whiskey bars were a little stuffy,” says Dave Schmier, founder of Proof and Wood Ventures, which has its own line of eclectic sourced whiskies. “It was a fun place to go and enjoy spirits and beer without pretense.”

Schmier paired up with former Idle Hands owner Rob Morton in 2019 to issue a limited-edition Idle Hands bourbon, and the pair is back with a couple of additional batches this year.

Both offerings this time are “small batch, heavy-rye bourbons,” according to Schmier. Each batch consists of 13 barrels (roughly 1,000 cases) aged at least five years, the first batch coming in at 95.2 proof and the second at 96 proof. Otherwise, their mash bills are identical: 60% corn, 36% rye and 4% barley.

The last Idle Hands collaboration, in 2019, was a 13-year-old bourbon that sells for about $275 a bottle, if you can find it. This time, Schmier says, he and Morton wanted something a “little more approachable,” which is why the 2021 bourbons they selected together are only five years old and retail for a more modest $55.

A close observer of the Proof and Wood line of whiskies will note that the latest batch of Idle hands shares a mash bill with P&W’s Deadwood Tumblin’ Dice 5-year-old bourbon. The Tumblin’ Dice label promotes it as a “heavy-rye mash bill,” and it’s bottled at barrel proof (between 109 and 119 proof).

Schmier says Idle Hands comes from the same barrels, but bottling it at 95 or 96 proof allowed him to work with Morton to balance flavor profiles and create something they feel is distinctive.

There are no plans on the table for an Idle Hands III, but “I’d be happy to work with him again,” Schmier says of Morton. 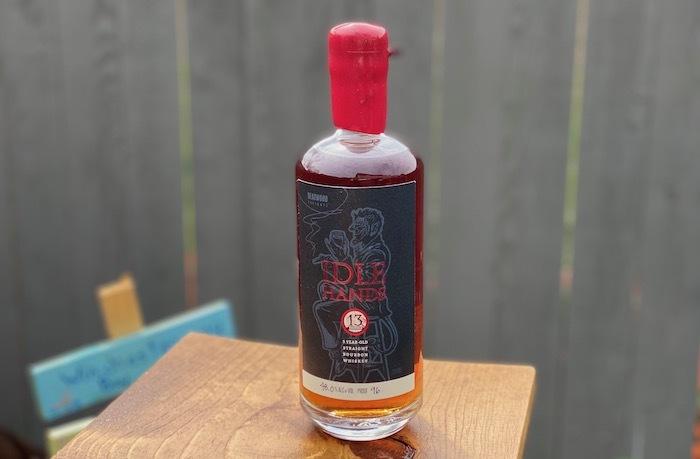 Appearance: Amber, almost the color of a darker piece of Citrine quartz. Decent legs on the side of the glass.

Nose: There’s honey and brown sugar, but the rye spice is definitely apparent, also. It smells, in fact, pretty much the way you’d expect a “heavy-rye bourbon” to smell. The oak-heavy traditional bourbon is in there, but you can’t miss the spice. It hits you as soon as your nose gets close to the glass.

Palate: This is a dark and rich whiskey, bringing to mind molasses and maple syrup. As with the nose, though, you can’t miss the spiciness and grassiness reminiscent of a rye. The finish is long and honeyed.

The first Idle Hands, in 2019, amounted to a total of 180 bottles. It was rare from the outset – more of a novelty item. This 2021 Idle Hands includes a production run of about 6,000 bottles, so you actually stand a chance of finding one in a liquor store in your state. That, it turns out, is a good thing. Idle Hands has an interesting backstory and, at $55, is a good bourbon for the price.