The relationship between mash bill number two bourbons and Buffalo Trace is a bit convoluted. While Age International Inc. owns the labels, Buffalo Trace makes the bourbon and distributes in the United States. However, Buffalo Trace only acknowledges Blanton’s, Elmer T. Lee, and Ancient Age on its website.

So, scarcity of information on Hancock’s President’s Reserve should not come as a surprise. About the only information provided regarding Hancock’s is that it is named after Hancock Lee, co-founder of Leesburg, Kentucky. While Hancock’s is not a limited release bourbon, finding it may present a challenge simply because many stores and bars are not aware of its existence.

While the relative anonymity and scarcity of Hancock’s may increase the allure for whiskey hunters, realistically, Hancock’s lacks any key distinguishing points when compared to the other mash bill number two, single barrel offerings. 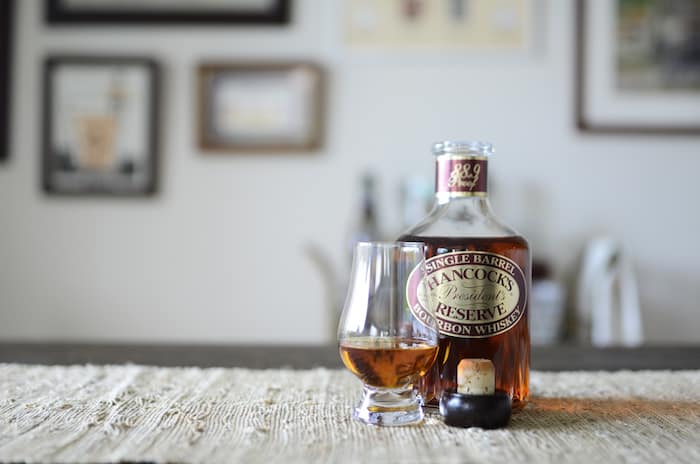 Palate: Hancock’s Reserve leads off the front of the palate with warm notes of cinnamon and lighter notes of dark fruits, such as plum and cherry. In the mid-palate, the cinnamon notes turn to pepper and oak with light vanilla notes balancing the slightly dry and bitter notes of oak.

The finish becomes slightly dry, with the pepper and oak notes and light caramel. Overall, the flavor profile is pretty balanced all the way through, and makes for a nice sipping bourbon in the spirit of Blanton’s and Elmer T. Lee.

Hancock’s President’s Reserve single barrel bourbon is very similar to the other Buffalo Trace mash bill number two offerings. In fact, I’d say the flavor profile falls somewhere between Blanton’s and Rock Hill Farms, with a touch more barrel and bitter notes than Rock Hill Farms. If anything, Hancock’s reminds me of the now-discontinued cult favorite, Ancient Ancient Age 10 year bourbon, which retailed for about $15 per 750 ml.

With that in mind, I would only recommend Hancock’s at the right price point. In the $35 range, Hancock’s would be a good choice for someone looking for an easy-sipping single barrel. But, if the price were $50 or more, Rock Hill Farms would be my preference.

204
Shares
17.5k
Views
Share on FacebookShare on TwitterGet Our Newsletter
Get The Glenlivet 18 Year Old at ReserveBar. Shop now!