Editor’s Note: This whiskey was provided to us as a review sample by Flaviar. This in no way, per our editorial policies, influenced the final outcome of this review.

Forty-five minutes into a video call with Flaviar founder Grisa Soba, I finally got the joke.

“Corn Trooper is a guardian of bourbon,” he said. “You know, like Star Wars.”

I didn’t know. An unopened bottle of Corn Trooper had been on my kitchen counter for two weeks, and I’d been missing the sly, pop-culture reference to Stormtroopers the entire time.

That fact, of course, says more about my lack of humor and imagination than Soba’s. This is a guy who started distilling absinth and vodka in his bathroom before deciding the spirits world seemed like a lot more fun than the management consulting he had been doing.

Flaviar, the online membership club Soba co-founded in 2012, tries to take the starch out of the sometimes stuffy world of liquor. The goal, according to the club’s website, it to “help people try more new things more often.” It has a database of more than 20,000 bottle profiles written in easily approachable language, and routinely throws in music, movie and TV references. Members receive samples through the mail, have a chance to taste a wide range of brands and labels they might not otherwise come across – and, of course, buy whiskies they like.

“We’re not trying to change the world the way big tech companies are changing the world,” Soba told me. “But think about it. When people drink whiskey, they drink it to contemplate life or when they’re with friends and family. We are involved in many people’s lives, in the moments they’re happiest. How cool is that?”

The seven distilleries are all listed right there on the front of the bottle. That, says Soba, is the point.

“We like to work with smaller brands and craft producers; they need more help than the big guys,” he says. “The goal for us was coming up with a brand that wouldn’t compete with them, but unite them and give them more exposure.”

Thus the second part of the name: United Craft Bourbon.

Soba, a native Slovenian now living in Brooklyn, said the base for Corn Trooper came largely from Oola and Breckenridge. Oola provided a high-corn whiskey that gave the mix sweetness, and Breckenridge had taken advantage of the Colorado elevation and climate to develop “a very well-rounded and extremely developed” bourbon.

Then he ticked off the rest of the list: Spicy notes from Balcones; a wood-forward contribution from High Wire; all-around traditional bourbon flavors from Kings County; a high proportion of malted barley from Hartfield; and a distinctive beer-barrel finish – “hoppy, savory, meaty, brothy” – from New Holland.

The trick is blending it all together in a way that creates a single compelling whiskey.

When Flaviar came out with its own blended cognac in 2018, which it calls Frérot XO Assemblage de Crus, it sent samples of different cognacs to 800 club members, bloggers and journalists. Feedback from those 800 helped determine the final product that ultimately went into the bottle.

Soba doesn’t have anything like that in mind for Corn Trooper at this point, although he says Flaviar will use crowd-tasting again in the future for other projects. Corn Trooper, meanwhile, will be an annual expression with the specific participating distilleries shifting from year to year. He’s already at work on Corn Trooper Batch 2, which will come out in 2021.

Soba and I spoke the morning after Flaviar set the Guinness World Record for largest virtual toast in history, with 3,594 people simultaneously raising their glasses and toasting each other’s health over livestream. It’s exactly the kind of ambitious (but also sort of silly) project Soba says will continue to guide Flaviar’s culture moving forward. He even threw out the possibility of creating a Corn Trooper that includes bourbons from distilleries in all 50 states – a daunting logistical task, not to mention the blending challenge. 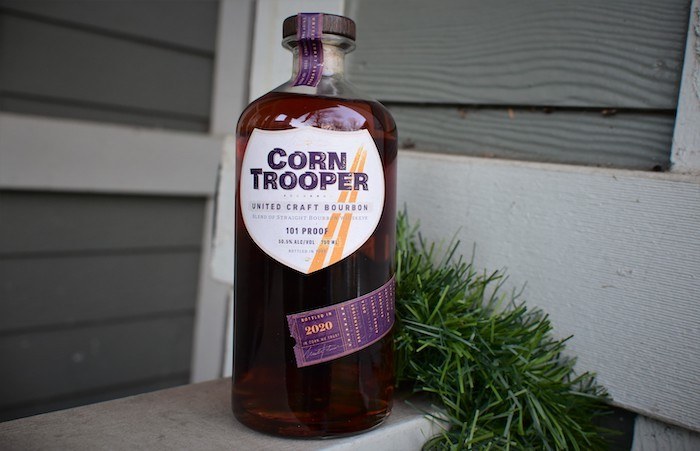 Nose: Warm and slightly boozy, with vanilla, maple syrup, caramel. The traditional bourbon scents are there, though they’re relatively mild.

Palate: The first thing you notice is spice, with hints of nutmeg and cinnamon. It’s prominent and goes all the way to the back of your throat, but doesn’t last long. It’s followed by a surprising sweetness, which tasted a bit like dark chocolate and cherry cola. Ultimately, it ends with a long, oaky finish.

The Corn Trooper label looks like a shield – the guardian of bourbon reference again – but the upper portion also takes the shape of an interstate freeway sign. And the seven participating distilleries are listed below on what looks like an old-fashioned ticket stub. The stopper on top of the cork shows the Great Seal of the United States, with the eagle replaced by an ear of corn. Together, Soba says, it’s meant to be “an homage to everything American” and to reflect an explorer’s spirit.

Unfortunately, the bourbon is not as developed as the marketing. Not that it isn’t good juice. It is. It just doesn’t have a firm personality of its own. If the label had been an unadorned “Nice Bourbon” label, like the old generic beer cans at the grocery store, it would have been sufficient. Corn Trooper hits all the right notes for bourbon, but none emerges to give the whiskey distinctive character. What Flaviar is trying to do here is admirable, and I love the spirit Soba and others are putting behind it. For now, though, this bourbon is probably a generation or two removed from being ready to stand next to the top-flight whiskies on your shelf.