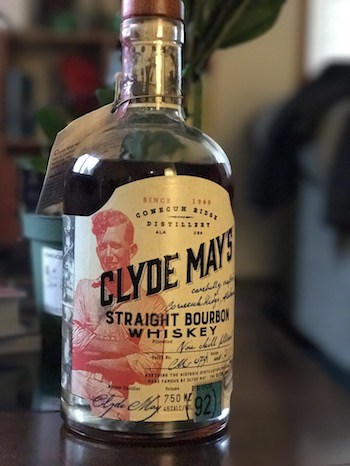 For many whiskey drinkers, the story behind the whiskey’s creation can be just as important as the flavor. For beginning drinkers, sometimes the story is the only introduction they have to the drink. As such, the whiskey industry has time and time again capitalized on the interplay between craft and story.

For the budding whiskey connoisseur, it takes a lot of time and effort to develop trust in your own palate, and an even longer time to grasp how the individual flavors work together. From a marketing perspective, telling a story is much easier. Some brands are able to deliver the complete package, and others rely more on the aesthetic.

Which brings us to Clyde May’s Straight Bourbon Whiskey from Concecuh Ridge Distillery. The Clyde May brand’s motto is “It’s better to break a law than to cut corners.” This motto harkens back to the days of Prohibition, when bootleggers would supply Americans with the then-illegal drink. Fast forward to today, and Clyde May’s brand still relies on the nostalgia of bygone ages to market their whiskey.

While they are mainly known for their “Alabama Style” whiskey, distinguished by being flavored with green apples in the barrel, the newly released Clyde May’s Straight Bourbon seeks to find a place on the shelves of more discerning whiskey drinkers who prefer their whiskey unadulterated.

The bottle leans heavily on nostalgic imagery. With a tough looking white guy, presumably meant to be Clyde May himself, on the front with a period haircut, some handwritten script on what looks like old-timey parchment, this is clearly a whiskey harkening back to a nostalgic age of whiskey production. But this is where things get tricky.

At first glance, one might assume that the whiskey was distilled in Alabama, but upon closer inspection the bottle reveals that it is a sourced bourbon from Kentucky. Without the defining qualities of the Alabama style, this whisky can’t easily separate itself from other brands selling similar product and has to rely on storytelling to differentiate itself.

That said, whiskey is for drinking, and while the story may have some holes in it, all that matters is if the taste lives up to the hype.

Nose: Even without actual apples added to the whiskey there is a sweet fruity smell, reminiscent of blackberry and peaches juxtaposed against heavy molasses and brown sugar.

Palate: The first sip starts smooth before transitioning into a medium alcoholic burn with a long finish. The fruity flavor from the nose changes completely, and settles into a sweet and spicy mix not unlike a peach cobbler. The alcoholic burn continues all the way down the throat when served neat. A few drops of water brings out the the sweeter flavor as well as stymies the burn.

It’s not at its best right out of the bottle, but benefits from adjustment with a little water. If they spent as much effort on making sure the whiskey was proofed appropriately as they did on making their bottle look great, this wouldn’t be as disappointing.

I can imagine that Clyde May’s Straight Bourbon Whiskey could work well in a cocktail like a Manhattan or an Old Fashioned,, but at the end of the day, it ends up being just a decent-enough whiskey.

73
Shares
20.2k
Views
Share on FacebookShare on TwitterGet Our Newsletter
Get The Glenlivet 18 Year Old at ReserveBar. Shop now!