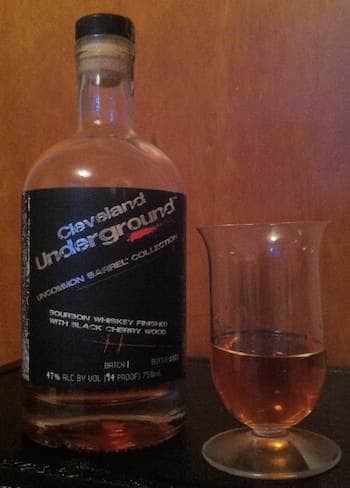 Recently I was given the opportunity to speak with Cleveland Whiskey owner and industry innovator Tom Lix about his unique and controversial whiskey aging process. Having now learned a little about the science behind his products, I’m turning to reviewing some of their whiskies, starting with a recent release from Cleveland Whiskey’s Uncommon Barrel Collection.

This bourbon, like the distillery’s more mainstream releases, is artificially aged using Lix’s proprietary process and cherry wood to finish. This difference in wood imparts its own flavor profile into the bourbon.  The first thing one notices is the dark color in the bottle, which is mostly caused by the wide, black label. In the glass it becomes a lighter amber, but retains a lot of its red hues. The next thing is the 94 proof rating, which you pick up on from the first whiff out of the bottle to the lingering burn when you finish a dram.

I find the nose of this bourbon pleasantly astringent, which gives way to notes of spice like cinnamon and cloves, wheat and fresh sweetgrass, along with tart cherries and slight citrus. Once the alcohol faded I caught lighter notes of vanilla and leather.

On the palette I really noticed the tartness of this whiskey, a bit like berries picked a little early, but still pleasant. Very little of the spice noticed in the nose comes to the front, which makes plenty of room for notes of dried apricots and other fruit, along with orange zest. It also has light tastes of vanilla and wood, similar to drinking a young whiskey.

The finish is fairly smooth, with a good balance of spice and wood. Fruit and leather take a backseat.

I haven’t gotten the chance to add it to any cocktails, but it seems like the type to fit right in for a different twist on your favorite. Overall I give this odd little bourbon an 86.