Kentucky-based Buffalo Trace Distillery has been making whiskey for more than 200 years. Over that time it’s racked up a number of awards for its brands that include not only their eponymous bourbon, but other excellent choices including Blanton’s, Eagle Rare, Elmer T. Lee, and of course, Pappy Van Winkle. The distillery became a National Historic Landmark in 2013: An article in the Lexington Herald Leader details the designation, describing its buildings reflecting pre-prohibition industrial architecture and other warehouses that go as far back as the 1790s.

However, while Buffalo Trace venerates the past, it looks forward as well. Not unlike a college freshman, part of what differentiates Buffalo Trace is its enthusiasm about experimentation.

Over the past two decades, the company has collected thousands of experimental barrels of whiskey aging in its warehouses. Each of those barrels has unique characteristics and experimental changes in the mash bill, types of wood, char, and so on. And on occasion, one of these experimental whiskies gets bottled.

Buffalo Trace’s Organic 6 Grain Whiskey Experimental Collection is one of its latest. Although it still has the at least 51% corn ratio required of all bourbon, it’s made from a six-grain mashbill: buckwheat, brown rice, corn, rice, sorghum, and wheat. All of the grains are certified organic; the whiskey was distilled on Buffalo Trace’s experimental micro-still to 130 proof white dog, before being put into eight, new charred white oak barrels. These barrels were then rested in the distillery’s Warehouse H on the third floor for seven years and one month, before the contents in them were then chill filtered and bottled at 90 proof.

Generally Experimental Collection releases have limited availability, so if this is something that sounds interesting, you might want to act fast. 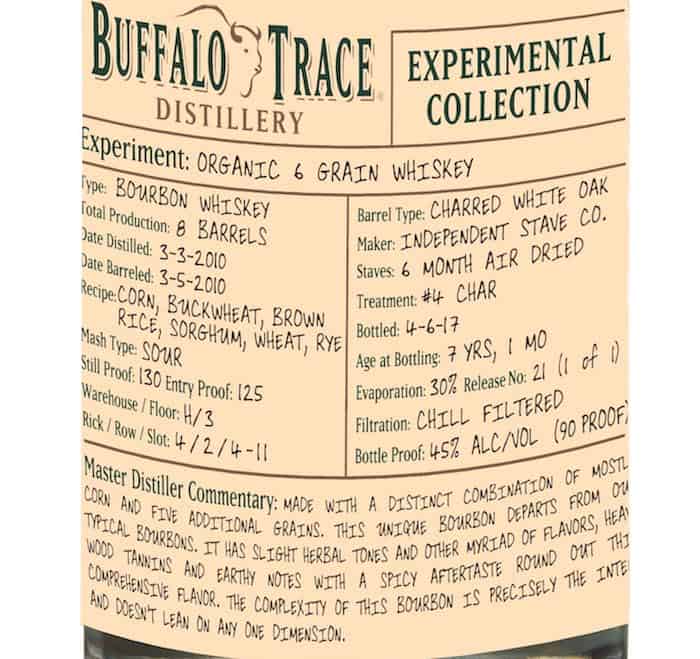 Vital stats: This was distilled in spring 2010. It contains buckwheat, brown rice, corn, rice, sorghum, and wheat in undisclosed percentages. It’s 90 proof and retails for about $46 for a 375 ml bottle.

Appearance: The wood of a freshly sharpened pencil; honey with light shining through it.

Palate: This has six grains? You wouldn’t know it. Not because any one flavor is especially dominant, but because the blend is so smooth and well-balanced. It’s honeyed, and totally inoffensive. I found it subtle and as pleasant on the palate as it was on the nose. My tasting partner found this a little spicy, and it does finish with a slight white pepper heat, but it doesn’t bowl you over.

I enjoyed the Buffalo Trace Organic 6 Grain Whiskey, but it didn't seem super-unusual, despite its provenance. It was cool to try and totally fun to taste a whiskey made with that many grains to see what you come out with. To be honest, I expected something more wacky, but I was also glad to try it. I would drink it by itself and not mix it, because it doesn’t need anything else. It’s not powerful enough that it cries out for a mixer.

On the whole, it’s nice to not scream one flavor. Sometimes subtlety is just what you need.

3.5
User Rating ( votes)
Sending
71
Shares
719
Views
Share on FacebookShare on TwitterGet Our Newsletter
Cheers to the Dads! Personalize a bottle of his favorite whiskey to create a modern gift for the modern man. Use code: FATHERSDAY20 for $20 off your next order of $100 or more at ReserveBar