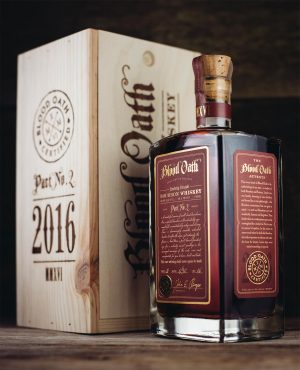 If spirits giant Luxco is good at nothing else, they’re masterful at marketing.

Founded as a bottling company in 1958, Luxco (despite sounding like a cartoon jewelry company, the name has a prosaic source: one of its founders was named Paul Lux) has gradually acquired spirits brands ranging from Everclear to Juarez tequila to Rebel Yell, almost all of them sourced. Whiskey-wise, along with Rebel Yell and Ezra Brooks, they’re behind the recent resurrection of Yellowstone Bourbon, which we’ve reviewed in recent months.

Another recent project is a series of high-end sourced, blended bourbons called Blood Oath. We ran a review of the 2015 edition, officially titled “Pact 1,” last September. The latest release, called Blood Oath Bourbon Pact No. 2, was released this spring.

It’s been said many times, but the packaging of this whiskey is something to behold. The label, appropriately blood red with the words “Blood Oath” in embossed gold, bears a cute (plastic) wax seal next to Luxco blender John Rempe’s signature. Script-style numerals imitate batch and bottle numbers, although on closer inspection, they merely show a date and the number “2,” as in “Pact 2.” Naturally, it comes in a wooden box the company would probably describe as “commemorative.” The whole thing would look very nice on the shelf in my smoking parlor, if I had one.

Inside the beautiful bottle is a blend of three anonymously-sourced whiskeys, a fact Blood Oath pitches better than any other NDP I know of:

“Blood Oath attests that every batch of Blood Oath is the undertaking of one man — a student of both bourbon and science. Loyal to no one family, favoring no one distillery and bound by no one philosophy – this bourbon connoisseur has one goal in mind – to seek out bourbons rare and wonderful, famous and forgotten. Then bottle them in combinations previously unimagined for a lucky few. Not to cater to anyone’s loyalties, he has sworn to never reveal where he finds his bourbon, but only to promise to choose and make the best he knows. Loose lips never tasted something so special.”

Joking aside, Pact 1 got fairly positive reviews. Blood Oath Bourbon Pact No. 2 is said to be a blend of three whiskeys: a rye-heavy bourbon, a wheated bourbon, and a port-finished rye, bottled at 98.6 proof.

Nose: Strong oak and charcoal make for an almost dusty aroma, not unlike a wood shop. Sweet notes like caramel, vanilla, and maraschino cherry contrast with the sawdust. After some time in the glass, maple syrup and a little warm spice come through.

Palate: Wood is still present on the palate, but it’s substantially mellower than what I got on the nose. It’s also not as sweet as I expected; a pleasant blend of honey, spice, biscuit, and marzipan make me think of baklava. The texture is velvety, with a long, smooth finish.

Final Thoughts: All in all, Blood Oath Bourbon Pact No. 2 is a pretty nice bourbon. I found the nose a little uneven, with aromas either woody or sugary, but the palate is better-balanced. Is this whiskey worth the $100-$130 it retails for? Probably not. But the bottle might be!