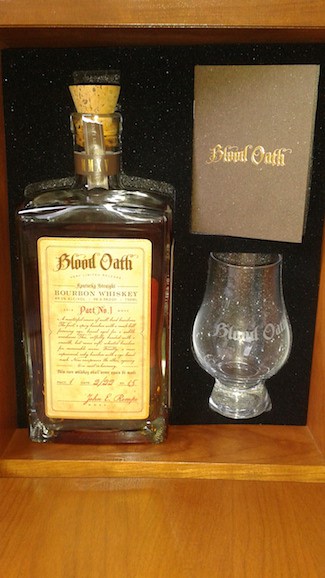 From the moment I pulled the box from the wrapping, I knew one thing: Blood Oath had paid handsomely for their marketing. From the lined wooden box, complete with snifter and booklet, Blood Oath Bourbon Pact No. 1 Whiskey puts on a red carpet Oscar-style performance.  It practically purrs with elegance.  Earlier this year, the Whiskey Wash featured Blood Oath upon its debut, and I was pleased to find a bottle of it now to review.

Blood Oath creator John Rempe of Luxco fame chose not only to openly bottle sourced whiskey, but to blend spirits, as well. He chose two rye based bourbons and one wheat forward bourbon as the components for the spirit.  Using a balance of spice and smooth, his theory was to create something unique and spectacular.  With 20 years of experience in the industry behind him, Rempe was confident in his first offering.  No wonder it comes in fancy clothes; one wouldn’t want a debutante to arrive at the dance in a pair of Chuck Taylors.

The hype, to be honest, has the romantic in me wooed. How can one not be a little pulled in by a super secret blend of three aged whiskies (7, 6 and 12 years)? My inner skeptic, however, is louder, and wants to know if this bottle is really worth its PR pricetag.  The marketing is just a little too smooth not to wonder.

Away from its sophisticated wrappings, Blood Oath is medium amber in the glass with the heaviest legs I’ve seen this year.  I watched one drop for a full minute before it gave in to gravity.   On the nose, honey and almonds tangle through tobacco and ginger.  Sweet and alluring, the nose gives no hint of its 98 proof label.

The palate is silky, with the almond sweetening to stonefruit and vanilla, only to give up to spice box and golden syrup, leather and a warm undertone of oak.  The finish is as long as its legs prophesied, full of candied nuts, marzipan, dark cocoa and tonka bean.

The chosen spirits are well rested, giving Blood Oath a depth that cannot be duplicated in the current flash-aging fad. And, as much as my inner skeptic hates to admit it, the blending does indeed live up to hype with a well coreographed balance of complex flavorways.   Even without the sophisticated packaging, this is a beauty of a whiskey.  To highlight the complexity, I would pair Blood Oath Pact No. 1 with simple, elegant dishes, like a double-cream flan.

I rate the Blood Oath bourbon a 91. You can find it for sale online at a number of retailers for an average price of over $90 a bottle.