I’ll tell you what to think: produce.

Every summer back east we had ripe, shiny red tomatoes and wonderful corn that didn’t even need butter or salt, because each niblet was like a teeny tiny nugget of sugar. And every fall we’d go apple-picking, bringing home bushels of ’em that would stay crisp well into January.

All these delectable items are brought to you by black dirt, the chocolate cake-colored fertile soil left by the glaciers that covered this area of Hudson Valley, in upstate New York about 12,000 years ago. In the the early 19th century, this area was drained to use in canal construction. The “black dirt region” ranges from the Hudson Valley to the intersection of Pennsylvania, New Jersey, and New York. 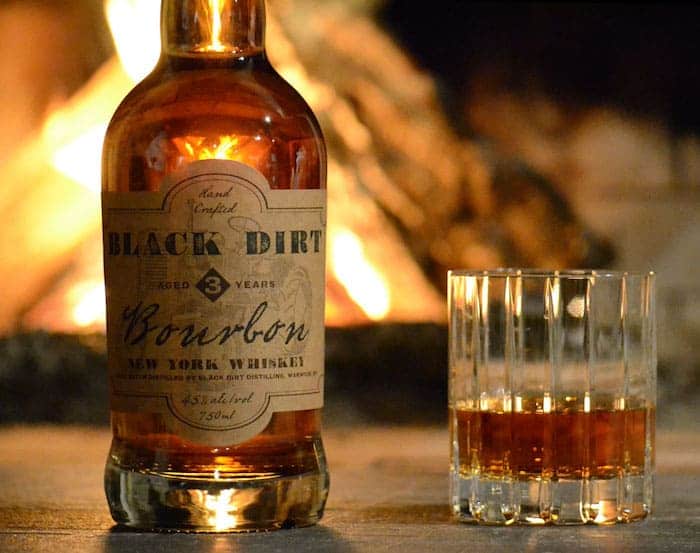 Back in 2002, Warwick Valley Winery & Distillery was founded by Jeremy Kidde and Jason Grizzanti. It would be New York’s first micro-distillery, and ten tears later, seeing the growth of bourbon and knowing the quality of corn that came out of the area, they decided to found Black Dirt Distillery. It’s a 4,000 square foot distillery with a 60-foot distillation column.

Nose: It’s earthy. (Not dirty, get your minds out of the gutter.) Think sun-warmed grape vines and wood pulp.

Palate: Fruity, though complex. It starts with the fruit but ends with spice. It still tastes young, though even after three years minimum in the barrel. The grape and wood essence on the nose also comes through on the finish, reminiscent of brandy.

I enjoyed this, but I feel like it needs to spend more time in the barrel. I think they could so some really great things here, but it needs a wee dram of patience. That said, I like that this is an unusual bourbon that doesn’t pretend to be something else.