While the label says Bird Dog, I’m pretty sure the dog shown on the label of the Bird Dog small batch bourbon in my hand is a beagle—maybe a hound. The mysteries don’t stop at the prominently featured beagle. The back label states that the bourbon is Kentucky stock, but we’re clearly dealing with sourced Kentucky bourbon, though there are only a few hints about where the bourbon actually comes from. Western Spirits, located in Bowling Green, Ky., paid some fine folks at Three Springs Bottling Company, a rectifier, to bottle the bourbon. 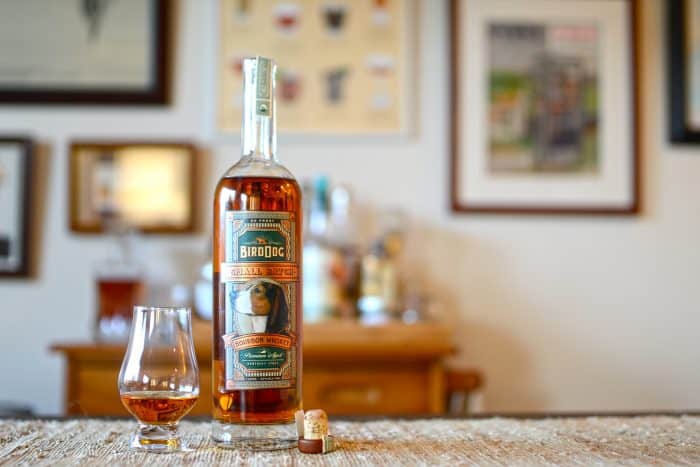 Bird Dog Small Batch Bourbon is pretty typical of sourced Kentucky Bourbon—86 proof, non-age stated. While the label says, “Premium Aged” (this doesn’t have any legal meaning), it doesn’t indicate the bourbon is straight bourbon, meaning that it could be less than even two years old. I’m not one to immediately dismiss sourced bourbon simply because the bourbon wasn’t distilled by the same folks doing the bottling. But, a bit more clarity on the label is preferred if a sourced-whiskey bottler is expecting me to spend money on their product.

Vital Stats: This is an 86 proof, non-age statement, rye-recipe bourbon.

Appearance: The bourbon has an appearance of honey and the faintest touch of amber. Overall, the bourbon seems young and thin with minimal legs.

Nose: The floral notes from the rye shine through on the nose with a touch of dark fruit underneath.

Palate: Citrus and currant notes lead off the front. There’s a slight cereal grain and earthy undertone that leads into a short, not particularly memorable floral and spice finish. To me, the palate indicates that the dog’s stay in the barrel was a relatively short one.

While the taste wasn’t unpleasant, there are better bourbons out there for less than the suggested retail price of $29.99. In the $30 range, there are still a few good options for age-stated, rye-based bourbon, such as Henry McKenna Single Barrel and Eagle Rare Small Batch. For the flavor profile described above, you can go grab a bottle of Evan Williams bottled-in-bond bourbon and still have $15 left over.