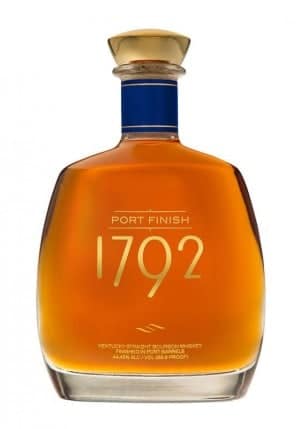 On its own merits, Barton 1792 Bourbon is a fine drinker. If anyone ever complained about it, I’ve never heard it. And if anyone did, I’d not trust their palate. It’s as reliable as its aged name implies. I’ve always enjoyed it.

I predict that lack of complaints will continue as drinkers get a taste of its new sibling, Barton 1792 Port Finished Bourbon. It is a well-mannered and delicious spirit born to be sipped.

We wrote about the impending release back in September.  The original bourbon was aged six years in new oak barrels before being relocated to used port wine barrels for a two-year secondary rest.

It was bottled at 88.9 proof, and is expected to cost $39.99 (roughly $15 more than the regular bourbon) when it hits store shelves in October.

Nose: A swirl in the glass delivers baking spices followed by aromas of toasted marshmallow, baked apples and hints of cocoa. A 10-minute rest brings on some raisin notes, a little smoke and a surprise whiff of pie crust.

Palate: The standard trinity of vanilla, caramel and oak arrive with the entry, followed by jammy notes on the exhale. Second and third sips unveil the effects of the port barrel rest: raisin and grape notes that coat the palate delicately but undeniably. The grape flavor is pronounced enough that one could almost pass this off as brandy in a blind tasting. It’s a delightful surprise.

The liquid delivers surprisingly solid body for a lower-proof spirit—not big and sturdy, but one that will hold its own in the depths of a cocktail.

Finish: Dry and slightly tannic with a lingering tingle, more than I expected from an 88.9 proof whiskey. It leaves plenty of sweetness behind in the mouth, but that disappears quickly.

Overall, it is a delicious expression that I can’t want to share with friends and experiment with in a Manhattan.