The unofficial motto at Laws Whiskey House is “no shortcuts.” Officially, it’s “Craft over commodity. Quality over quantity. Whiskey above all.” Amidst a burgeoning craft spirits scene in Colorado, founder Al Laws knows that whiskey done right takes time, creativity, and dedication. What makes Laws unique is his reinventing of whiskey tradition in order to create the best possible product, from his custom-made Vendome still to the difficult and painstaking production of four-grain whiskey as a flagship product. Laws’ website proudly lists his suppliers, like Briess Malting, Colorado Malting Company, and the Independent Stave Company, showcasing the best-of-the-best ingredients which surround this brand with an air of commitment to excellence.

In addition to relying on craftsmanship to make this whiskey great, there’s also the Colorado climate. The constantly changing pressure and temperature allow the oak barrels used for aging to continue infusing the liquid with char and oak notes year-round; a stark contrast to Kentucky’s sleepy winters in which barrels have little opportunity to move the liquid in and out of the oak. A minimum of three years aging for this product could easily seem like five or six in such an environment. 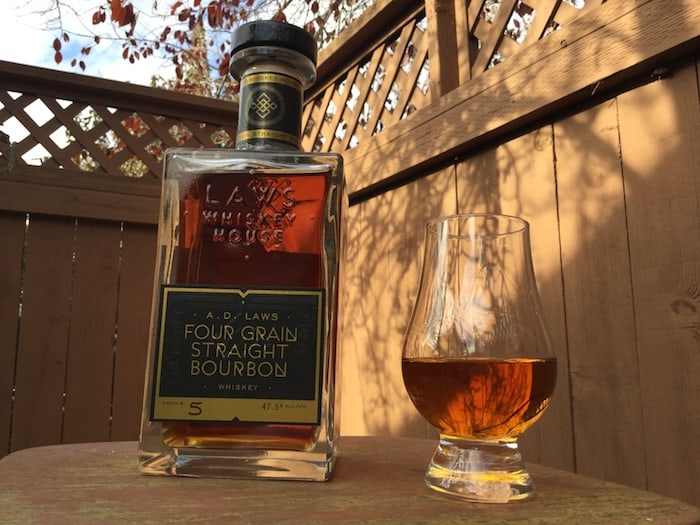 The perseverance and pervasive attitude at Laws also attracted one of Colorado distilling’s superstars, Jake Norris, who co-founded Stranahan’s back in 2004. With all the pieces in place, from high-end ingredients to custom equipment and true creative talent, it seems like a foregone conclusion that the spirit in this beautiful decanter bottle is award-worthy.

We checked out their distillery early last year and loved it, now it’s time to sit down with their signature whiskey – A.D. Laws Four Grain Straight Bourbon – and see if vacation memories hold true in a more practical environment.

Appearance: Sits in the glass with a pleasant orange sunset-like hue and some burnt straw highlights. Viscosity is there but not sticky or gooey. Clarity is impressive.

Nose: Initially I gather a very estery profile here. First aromas are heavy on tropical and stone fruits: cherry, dates, dried apricots, and dried bananas. There is just enough vanilla and atomized heat in the bulb of my glass to be reminded that it’s indeed whiskey.

Palate: First hit on the palate is dry and leathery with a glimpse back at the perfume of the previously-mentioned apricot, providing a full-flavored first sip while lacking a bit of body that would carry such bracing intensity. Notes of black pepper and breakfast tea are present, with an overall spicy late-palate bringing forward some nuanced clove and an underlying layer of butterscotch.

There is a wink of sweetness that emerges throughout further sips and palate acclamation, which plays off the initial heavy ester profile in the nose.

This is the Old Spice of whiskey. It’s meant to be big, bold, intense, and challenging to someone looking for sweeter or more delicately balanced. Several minutes after ceasing enjoyment of this beverage, I can still feel the alcohol heat and oak dryness on my gums and tongue. The overwhelming notes of overripe fruit and banana in the aroma, however, distract from what it seems Laws is trying to achieve here. Would love to try a further-aged version of Laws Whiskey House Four Grain to see if additional cohesiveness could be achieved. Unfortunately, this work-in-progress is not a repeater for me.

46
Shares
7k
Views
Share on FacebookShare on TwitterGet Our Newsletter
Get The Glenlivet 18 Year Old at ReserveBar. Shop now!