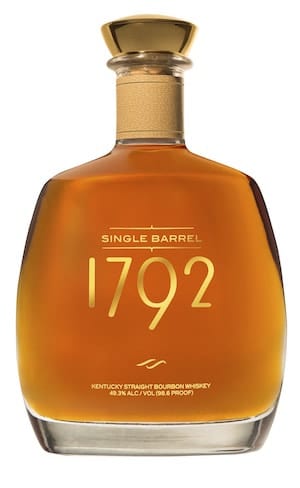 Surely no one would say that what’s missing from the domestic spirits scene is another Kentucky bourbon. But Single Barrel 1792 Straight Bourbon Whiskey is something different: complex without being overbearing – balanced like a good Bordeaux.

The 1792 Single Barrel Single Bourbon has a unique flair derived from its high-rye composition, limited-edition single-barrel production, and being a straight bourbon (at least two years old, aged in a new oak barrel). Beyond the original 1792, this is their third limited edition expression of 1792, the other two being Sweet Wheat and Port Finish. 1792 has this to say about their Single Barrel limited edition:

“In order to create this unique bourbon, the finest barrels are selected and tasted from the best aging warehouses. Only those barrels deemed ‘exceptional’ are then bottled individually, one by one. This preserves the distinct character of each barrel.”

The bottle itself, and particularly its marketing materials, urge you to see it as an example of understated elegance, reminiscent of The Great Gatsby or Art Deco. Storytelling is essential to both the brand and the liquid itself. According to the producers, 1792 is a bridge from America’s rustic bourbon past to a new future: high-brow sophistication.

Plus, a good story is necessary to separate out a small-batch sub-brand like 1792 from its giant distilling parent, the Sazerac Company. 1792 is distilled and bottled by the Barton 1792 Distillery in Bardstown, Kentucky – “Bourbon Capital of the World.” The Barton 1792 Distillery itself was established in 1879 on 196 acres. 1792 Single Barrel edition is 98.6 proof, priced around $40, and available in most states.

Narrative aside, I let the small-batch bourbon speak for itself and investigated the mash bill only after a tasting. 1792’s distinctiveness showed through at first sniff. Here are my thoughts on the sample sent to us for review.

Palate: Caramel-forward, candy-like but with the obvious bite and heat of a rye. Young wood (sawdust) and gently roasted almonds dance alongside specks of Meyer lemon. The body is medium-thin, lingering slightly but not blasting your palate. The overall mix is good, but it does have a sharp, alcoholic bite at the end.

While caramel notes and a smooth mouth-feel certainly come to mind, bold and brash (as 1792’s source materials credit) may be a little far. This is not the sort of bourbon that would get into a bar fight. Instead, it’s perfect for sipping on a warm summer day as the sun sets, or mixing into a low-sugar (potentially high-citrus) cocktail. 1792’s versatility is impressive. Like an ambitious, well-aged wine, 1792 knows it is delicious without needing to show off. Just a little more follow-through – less of a sharp end note – would be the perfect cap to a great drink.