Editor’s Note: This guest whiskey review was contributed to us from The Bourbon Scout. Want to have your say on The Whiskey Wash? Pitch us a guest post idea via our contact form and we will get back to you.

The 10th Mountain Whiskey & Spirit Co. bourbon is a 75% corn, 6-month-old, 92 proof whiskey aged in various sized “#4 char” oak barrels.  It is produced in Gypsum, CO by two friends and longtime Vail residents, Christian Avignon and Ryan Thompson. They rent a 7,000 foot facility where they mash Colorado sweet corn with Rocky Mountain snowmelt and distill it in a 500 gallon Vendome still.  They age the whiskey in barrels that they personally cooper.  It’s a thrilling example of American entrepreneurship.  But perhaps, I am a bit biased.

I served with the 10th Mountain Division from early 2011 to late 2014, including a deployment to eastern Afghanistan. While wearing the historic powder keg and “Mountain” tab on my arm, I experienced long runs on -35 degree February mornings, nights sleeping in the snow-blown woods of northern New York, hundreds of late nights/early mornings working in my WWII-era office, and ten whiskey-less months in the violent and rugged Hindu Kush mountains.  I am extremely proud of my time with the “Climb to Glory” division, but I am equally as proud of the division’s history.

In 1943-44, the men and officers of the 10th Mountain Division trained for alpine combat at Camp Hale near Pando, Colorado and present day Vail.  While the division was held in reserve for much of WWII, it was finally called to action in Italy in late January 1945.  After less than a month of combat, on February 18-19, the division’s 86th Mountain Infantry Regiment launched a wildly ambitious overnight assault of the 2,000-foot rock face, “Riva Ridge.”  Atop the ridge were a Panzer Grenadier company from the German 232nd Division and two German mountain infantry battalions.

Miraculously, the lead platoons reached the top of Riva Ridge without a casualty (although the division suffered 1,200 casualties during the Italian campaign). Once atop the ridge, the Americans attacked Mount Belvedere, broke the back of the German defenses in the Po Valley, and ended the war in Italy.

10th Mountain Division veterans returned home and dispersed into mountain ranges all over the world.  10th Mountain veterans founded Vail and Aspen resorts; they became managers of Squaw Valley and Alta.  Division veterans coached the U.S. Ski Team and competed in the winter Olympics; thirty of them have been inducted into the U.S. Skiing Hall of Fame.  They established the 10th Mountain Division Trail and Hut system, spent careers in the National Park Service, and implemented wilderness rescue techniques (like those rehearsed at Camp Hale and relied on in Italy).  Veteran Paul Petzoldt established the National Outdoor Leadership School, Bob Bates became the first director of the Peace Corps chapter in Nepal; David Brower became the head of the Sierra Club; Minnie Dole continued to lead the National Ski Patrol.

One of the men serving with the 86th was Frederick Vetter, a medic from upstate New York. Vetter returned from the war and went on to work at his family’s hardware store.  He spent some time as a full time ski patrolman at Gore Mountain, NY.  He always encouraged his grandson, Christian Avignon, to head west to the mountains where he trained as a young soldier.  Vetter passed away in December 2007. In his honor, Christian, who has lived in the Vail Valley since 1998, developed the idea for the 10th Mountain Whiskey & Spirits Co. with Ryan. Now that the dream has become a reality, they’ve hung the late medic’s skis in their new tasting room on Bridge Street in downtown Vail.

The 10th Mountain Division was inactivated in 1958 but reactivated in 1985.  Since then, the division has seen more combat than any other conventional unit.  Other veterans of the “modern” 10th include Stranahan’s head distiller, Rob Dietrich, who served in Somalia during the infamous Black Hawk Down incident and two Medal of Honor recipients (SFC Jared Monti and CPT Will Swenson).

I got to speak with Christian and Ryan recently about their distillery and their future plans.  It is clear how dedicated they are to their craft and to honoring not only a historic Army unit but the mountain lifestyle. For one, Ryan has a relative who taught them how to construct oak barrels.  They may be the only distillery owners personally involved in cooperage.  They’ve also been experimenting with “high altitude aging and agitation” by driving full barrels over Rocky Mountain passes, exposing the product to 7,000 foot elevation changes in one day, which promotes maturation in new and exciting ways.

Business is good.  10th Mountain bourbon is flowing in the same mountains where the founders of Vail and Aspen endured their most challenging and critical training.  On this September 11, remember that we fight for the freedom to pursue happiness, and nothing makes me happier than good American whiskey.  Climb to Glory, Drink to Glory, To The Top. 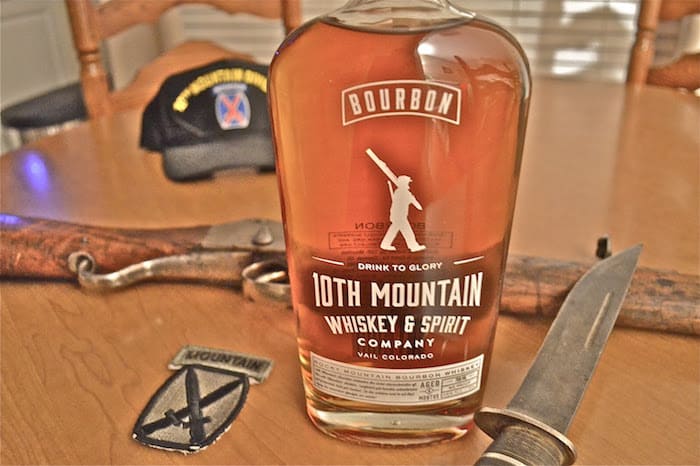 Nose: Initially, the nose is young and light- mostly corn and ethanol.  After some air time, I get charred oak, mint, Big Red cinnamon, ripe plum, and a hint of meat, like pepperoni.

Tasting notes: The first sip is also a bit raw with corn and alcohol leading the way.  The body is thin, but the flavors are pleasant.  It features a creamy sweetness, like a vanilla frosting, peaches, and honey.  The finish is quick with a blast of spice, oak, and black pepper.

Overall:  B.  For a whiskey that spent a mere six months in the wood, it’s pretty good.  I like it as an occasional sipper- at $58/bottle, I’m not splashing this into cocktails.  As the distillery matures, time will work its wonders on the sweet corn and Rocky Mountain snowmelt.  I can’t wait to try their rye whiskey and future releases of the bourbon.