Heather Greene is a busy lady. The author of Whiskey Distilled: A Populist Guide to the Water of Life, whe’s now hard at work on her second book while also consulting on projects, writing articles, and appearing on discussion panels. Knowing Heather, and coming from the perspective of also being a woman in the spirits business, I knew one critical way to persuade her to speak to me for The Whiskey Wash would be to promise not to dwell on the whole Women in Spirits topic. So let’s get that out of the way.

What’s it like to be a woman in spirits? It’s like being asked that question every time you are interviewed for a piece. It’s like having to incessantly discuss the cover of your book, though other authors who appeared on their own covers, like Jim Murray, aren’t questioned about theirs. I even researched the interview by going online to find Greene’s appearance on NPR during her book tour, to discover that what was intended as an expert whiskey discussion ending up nightmarishly morphing, at the hands of the producers, into a fluff piece about girls drinking whisky. So to lure her out on a warm summer New York City afternoon over aperitifs and lunch at Caffe Dante, I had to assure her we had far better things to discuss. Because there are. So we did. 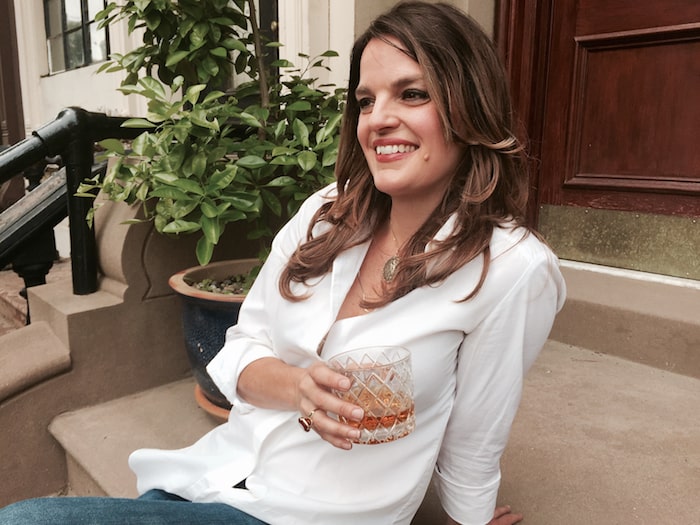 Amanda Schuster: What was it about whiskey that drew you into that world?

Heather Greene: I was in Scotland for two years, and my environment and culture was whisky, so it made sense I would take part in the same gustatory pleasures as the people around us. I was very into wine – I was working for Danny Meyer and Morrell Wine Bar when it was at its other location – I was called the “bar sommelier.” When you were a musician in the late ‘90s and 2000s, that was what you did to make money, you tended bar. This is in my book, but my husband was in graduate school in Scotland and there was a store nearby that sold wine, but it was so expensive, especially on a student and struggling musician budget. The pound exchange was crap, so it was like $40 for a bottle.

But whisky was really affordable back then and one night he came home with a bottle of Lagavulin Distiller’s Edition – those were the days, right?- and said, ‘Let’s just drink THIS.’ We enjoyed it so much, especially since it was raining and cold and the fire was on, and there I was writing music on this old 19th century piano, and it just fit. My husband was busy with school and I was touring and playing concerts all over the world. In between my husband said, ‘You really need to do something.’ So I knocked on the door of the Scotch Malt Whisky Society in Edinburgh and asked for a job and from there I just fell in love with whisky – the sensuality of it, the tasting, the nosing, the mouthfeel. For anyone who’s really into wine, the transition is easy.

AS: People forget that. There are so many wine drinkers who are afraid of getting into whisky and other spirits and I don’t understand what’s intimidating them so much. You can easily transpose the two. To use a musical reference, it’s not like learning guitar when all you’ve played is the piano. It’s much easier than that.

HG: That’s a great example. The mechanics of music are somewhat the same as enjoying wine and whisky, the same parts of your brain are receiving those pleasurable signals, shutting off the incessant outside chatter and wanting to focus on pretty things.

AS: And they share so many similar traits – a sense of terroir, regions, etc.

HG: The only differences really are the ABV and the fruit. I guess for some people, the higher proof makes it harder to get at the aromatics of it… So back to how this all started and also music vs. whisky and how they are so similar – there’s also a science there. In order to be a musician, I spent hours doing scales and practicing, it was something ethereal mixed with the technicality of writing a song. In the same way, you have to learn the technicalities of whisky – the science of fermentation, how a still works… so the two places in my heart came together.

AS: So many people in the spirits world are musicians. Are there whiskies that remind you of certain songs and artists?

HG: Absolutely! You can compare smoky whiskies to Dusty Springfield, Taylor Swift would be the bright, crisp style. Tom Waits is rye.

AS: So who is flavored whisky?

AS: So speaking of flavored whiskey, is it here to stay, is it changing at all?

HG: You know, I thought that was going to die down. I was writing an article for a publication on flavored whiskey and I went to the library and found this old recipe for it from like the mid 1800s about how to make whisky palatable. What people forget is there’s always been this trend of mixing herbs and spices into spirits, since they were perceived as something medicinal. I had to ask myself, ‘Okay. So what’s so bad about this now?’ I think the thing that bothers me is these big companies use these synthetic flavors to get more people drinking their brand. But there’s a place for it, like Leopold Brothers’ beautiful, gorgeous flavored whiskey with real fruits.

Also, here’s something people don’t talk about [in terms of flavored whiskey]. If you’re a whiskey lover, vodka’s actually an interesting place to go. Here’s why: Take Belvedere. They’re using 100% rye, like whiskey, right? Back to the flavored thing, I went to this vodka bar in Warsaw and there was a sommelier pulling out these incredible flavors for a blind tasting. He served Belvedere among them and it was really beautiful, but you have to taste a few to get the nuances. Whisky lovers should try this sometime! Quality vodka has a great mouthfeel and aromatics and is made with the same quality and attention to detail. Don’t throw the baby out with the bathwater here – there’s a real science to some of this when it’s done well and not some cheap apple thing.

AS: You probably wouldn’t have noticed the vodka thing if you hadn’t approached it from a whisky perspective. Has there ever been a flavor in a whisky that’s surprised you?

HG: Yeah. Allison Patel’s whisky [Brenne]! It’s so out of this world – I thought, ‘Is this really what whisky can be?’ I was drinking cocktails with  Xavier Herit – one of the unsung bartenders on the scene – at NOMO SoHo. I had the bar team taste Brenne. Think about it – it’s just three raw ingredients – water, grain and yeast. But that is a whisky that is clearly getting all of its flavor from very specific influences. Estelle Boissy at Del Posto, another of my favorite bartenders, also makes great drinks and is a fan of Brenne.

What surprises me is the real expression of strong, forward amyl acetate – the molecular compound that comes out of it – it’s fruity, elegant, something that sits somewhere between Cognac and Scotch that is really unique. It was the whisky that drove me to meet her; I like it for its difference, its boldness. She’s brave to bring something like that to market and she knew what she was doing.

AS: Do you have a favorite whisky cocktail?

AS: Bourbon Heritage Month is here. Is there anything about the state of bourbon in 2016 you want to comment on?

HG: I’m really excited that all these small craft distillers will be rolling out their more mature whiskies they’ve been waiting on soon. There were so many consistency issues, etc., – as I called them, ‘rustic’ flavors – but they’re going to be coming into their own now. The stuff aged in 53 gallon bourbon barrels will be coming out – that’s exciting! Also, distilleries like Michter’s relocating and making things at their own distillery in a very real way.

And we’re starting to see places like the Marriott hotel group make a huge commitment toward offering customers really good whiskey at their bars and educating their staff – they trained 750 bartenders on their properties on the art of bourbon and how to present it in cocktails like Manhattans and Old Fashioneds. As they revamped these hotels they’ve become proper places to have a drink focused on integrity. Their bar sales have gone up just from their bourbon stock alone. I like seeing these companies invest in consumer needs and do it well.

Fifteen years ago would anyone have cared? Consumers want good quality drinks now, and it’s fun to see that change and see companies respond and follow through, meet the demand – they even do all the different ices now. It was fun, I was staying at a Marriott recently and apparently the bar was using my book as a trainer on some of the drinks.

AS: That must be nice!

AS: OK, last question – if you could have a drink with someone past or present, who would it be?

HG: I would love to sit down and have a drink with Roxane Gay. She writes for the Times and wrote this really funny book called the The Bad Feminist that was so witty and fun. She’s really cool. Her Twitter feed is hilarious. Glad she’s alive so hopefully this can happen some day. And I think she likes bourbon!