Editor’s Note: As a matter of disclosure the main founder of The Whiskey Wash is a member of the Library.

Just a little over two years old, the Multnomah Whiskey Library has already established itself as one of the nation’s most exciting whiskey bars. Everything about “the Library,” as its staff and supporters call it, evokes the kind of aged leather, gilt-framed, green-walled gentleman’s club where you might expect to find Mycroft Holmes sharing a quiet dram with a recent veteran of the Boer War.

But instead of nineteenth century London, the Multnomah Whiskey Library is in the West End of downtown Portland, Oregon, a once nondescript part of town now home to a new concatenation of upscale restaurants, fancy cocktail bars, and high-end boutiques. Once you walk up those stairs, though, you’ll be forgiven if you feel you’ve stepped a dozen decades back in time. 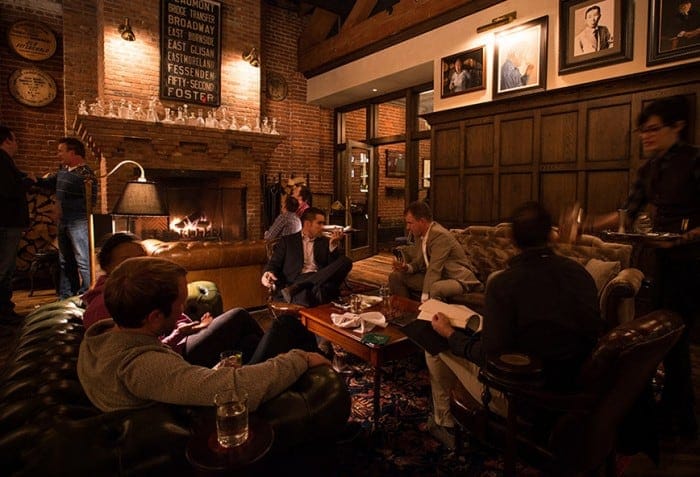 Part bar, part educational center, and part exclusive hideout, the Library is open to the public but also offers an annual membership for its most committed whiskey enthusiasts. As a member, you have the privilege of making reservations (bypassing the famously long line), receiving invitations to special events, and first dibs on registration for classes and tastings. Those memberships are sold out for now, but that doesn’t mean you can’t visit in the meantime (plus that gives you time to start saving for the $600 membership fee).

Inside, two of the four walls are lined from counter to ceiling with spirits, some accessible only by a sliding brass ladder. A crystal chandelier dangles above a huge rectangular bar, while groups of drinkers relax in buttery leather booths or deep armchairs in front of the roaring wood fire. This is whiskey at its classiest, where selection is balanced with service and you can expect your server to feel just as comfortable recommending a new Speyside as mixing a Manhattan.

The Library has about 1,200 whiskeys, give or take a dozen, plus about 600 other spirits and a careful selection of beer and wine. The spirits list comes in a bound leather tome – overwhelming, even to the most knowledgeable reader. I confined myself arbitrarily to one category (rye) in an effort to narrow down my choices enough to make a decision.

After a Pennsylvania Rye called Dad’s Hat (spicy and relatively light – a tonic to the work day), I ordered an Old Fashioned made with Old Forester Signature 100 proof. Made table-side on a behemoth of a cocktail cart, it was outstanding – a perfect balance of sweetness, acidity, and bourbon spice all draped over a crystal-clear chunk of ice the size of a Rubik’s cube. 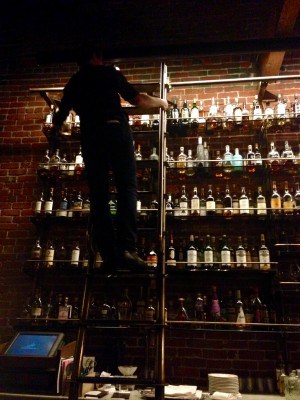 A server uses a ladder to reach top-shelf bottles

When planning your visit, know that this isn’t the kind of bar where you can just loiter around by the pool table, Jack-and-Coke in hand, until a bar stool opens up. Every patron to the Multnomah Whiskey Library is greeted and seated by a host, much like a restaurant. Friday and Saturday nights can be very crowded, with a standard wait of 90 minutes or (much) more. Bar Manager Jordan Felix reports that Mondays are the best days for non-members to visit, since it’s the only day nobody’s allowed to make a reservation.

Felix also suggests that you come with an open mind, ready to explore and learn something new. Staff training is taken very seriously at the Library. Each Tuesday, they gather for an educational event of some kind: a presentation from a distributor or brand representative, a visit to a local distiller or producer, or a guided tasting through themed verticals or collections. That means your server knows a lot about whiskey, and it’s up to you to take advantage of it.

A great way to help the sharp staff make suggestions is to tell them about spirits you know you like. A big fan of Lagavulin? This is your chance to branch out to another Islay distillery, like Caol Ila or Laphroaig. Enjoy big, classic, powerhouse bourbons like Wild Turkey? See if that love extends to one of Four Roses’ small-batch releases.

While The Library offers no reservations for non-members, they just opened a new overflow bar downstairs called the Green Room. The menu is geared towards lower-proof cocktails, perfect for passing the time before your name’s finally called.