Dan Gardner wears many hats.  As Midwest Regional Sales Manager for Four Roses, he’s responsible for managing business with distributors in the six states he covers- everything from managing allocations to maintaining pricing.  There’s a lot of industry education and even some consumer education about Four Roses products that goes with the territory.  So chances are if you’ve ever been to a cocktail event or even a liquor store tasting, you’ve talked with Dan Gardner.

Gardner got his start working in a package liquor store during college.  After college he began working in sales for Kentucky Wine and Spirits, then for a winery in California, finally ending up as a Sales and Marketing Manager at Southern Wine and spirits.  He’s been with Four Roses just over six years now, and his passion for the brand and for bourbon in general comes through in everything he does.

In three of his six states, bourbon events are pretty much constant.  “There’s always something going on in every market.  Most days I have my choice of three or four things I can be doing in any state,” says Garnder. “The other key issue is you have to develop people who can cover for you in key markets.  I have very good people down in Tennessee and in Missouri.  Missouri is a great bourbon market in general.  I have a very good distributor there.  I have people I can turn things over to that I can count on.” 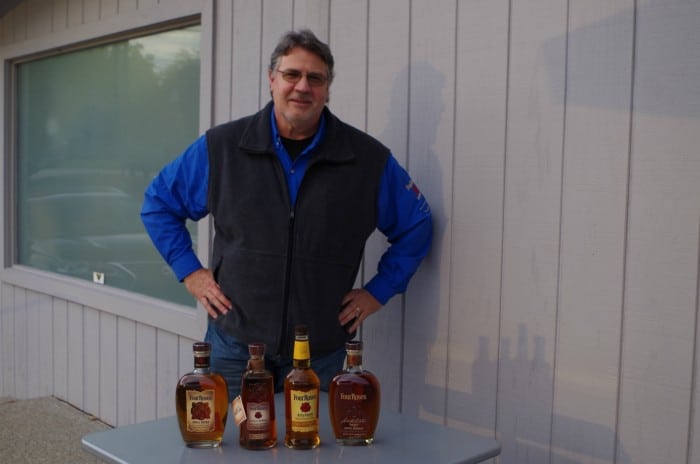 As for pervasive bourbon myths, “bourbon can only be made in Kentucky- that’s the big one.  It’s when I deal with consumers that I hear that more- I hear it regularly still.  More and more people are coming in and wanting to be educated, their friends are bringing them in, and they want to know what the heck is going on.”

Gardner also hears one particular generalization about bourbon repeatedly- that it goes up in proof as it ages, whereas Scotch goes down in proof as it ages.  Four Roses Bourbon goes into the barrel at 120 proof, though the 125th Anniversary Limited Edition Small Batch, which was bottled at barrel proof, was 103 proof.  That small batch contained 2-13 year old and 1-18 year old bourbon, all taken from the lowest level of the warehouse.  Four Roses only has single story, 6 tier warehouses.  “You can tell what floor it was on by the proof.  Tiers 1 and 2 will always be below 120 proof.  Tiers 3 and 4 will always be around 120.  Tiers 5 and 6 will almost always be above 120 proof.”

He went on to explain how to read the codes on your bottle of Four Roses Single Barrel to tell exactly where they came from.  My current bottle is Warehouse No. KE, which means the East side of warehouse K.  The barrel number is 57-W, which means the 57th section and the W barrel position.

As it turns out, this information can be extremely handy in figuring out what is causing variations in different bottlings of Four Roses Single Barrel.  Once when he was doing a tasting at a store called Imbibe in Chattanooga, Tennessee, one of the bottles he cracked open tasted significantly lighter than what he was expecting.  He went to the shelf and got another from a different barrel, and then to his car to get a bottle from yet another barrel.  It turned out they were all from the same warehouse, same side, and same rick, and they were almost exact neighbors in the rick- M, N, and P.  The difference must have been in the barrel, he says.

Four Roses is one of those bourbon brands with its own unique history and way of doing things, so it’s always nice to learn more about what they do.  And it’s such a relatively small company as bourbon goes, even the Midwest Regional Sales Manager is a Brand Ambassador as well!

558
Shares
2.5k
Views
Share on FacebookShare on TwitterGet Our Newsletter
Get The Macallan® Rare Cask at ReserveBar. Shop now!