Vendome Makes The Copper Stills That Make Your Bourbon

It’s common knowledge at this point that Louisville, Kentucky, is the center of the bourbon universe. The city is at the heart of Kentucky’s most famous industry, and everything you need to make bourbon can be produced within the city limits. One such business at the heart of the bourbon industry that often goes unnoticed is Vendome Copper and Brass Works.

If you’ve never heard of Vendome, you’re probably in the majority. But if you’ve ever toured any bourbon distillery there’s a 90% chance you’ve seen some of their work. Vendome has been making the copper stills and other distillery equipment for the bourbon industry for over a century in a warehouse in the Butchertown neighborhood of Louisville. For that entire time, the company has been owned by the Sherman family. 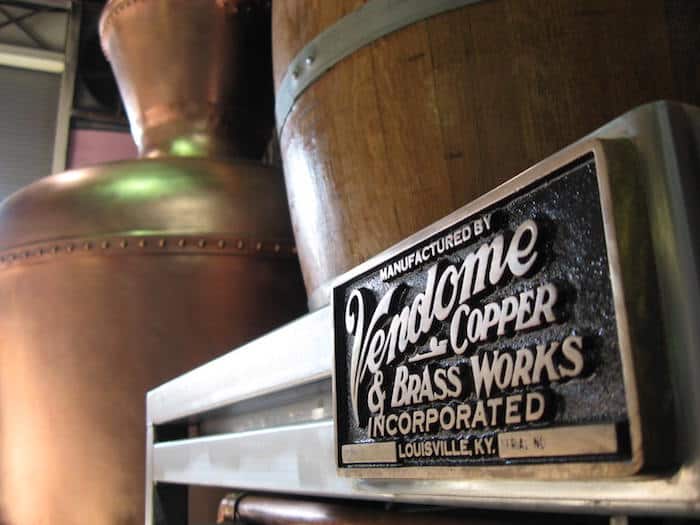 Elmore Sherman began his copper and brass distillery equipment fabrication career working for Cincinnati-based Hoffman, Ahlers & Co. He started there as a bookkeeper around the turn of the century, eventually overseeing the entire operation. After several deaths in the ranks of the owners, Sherman went out on his own, founding Vendome Copper and Brass Works. Though the current owners aren’t sure exactly when the company was founded, it is believed to have been sometime before 1910.  A tax stamp on a piece of equipment they fabricated in 1910 was numbered 45, indicating it was the 45th piece of equipment Vendome produced. Knowing the production pace of the early 1900s, owners estimate Vendome began doing business two to three years before then. The company incorporated shortly thereafter in 1912.

The company was able to continue producing distilling equipment during Prohibition for six Kentucky distilleries licensed to produce medicinal whiskey during Prohibition, remained a customer throughout. Vendome expanded their portfolio and began producing steam boilers and gasoline pumps for a short time. Once Prohibition ended, orders for stills began pouring in from as far away as California as over 100 distilleries opened in the four years after Prohibition was repealed.

As with all aspects of the bourbon industry, Vendome weathered many setbacks over the decades. Louisville experienced an epic flood in 1937, which filled the copper shop almost completely. Then, a few short years later, America entered World War II and all the distilleries were required to convert to producing ethanol for the war effort.

After the war, American whiskey began to lose popularity. Many Kentucky distilleries went out of business, and Vendome lost a significant portion of its copper business. However, they had begun working with stainless steel by that point, and the company was able to secure business in other industries in order to keep the doors open. Today they produce industrial equipment for breweries, confectioners, and the pharmaceutical industry.

As far as most major distillers are concerned, Vendome in Louisville, as well as Abercrombie and Forsyths in Scotland, are the three major players in the distillery equipment fabrication game. There have been new companies founded over the last decade or so, but many cater to smaller craft distillers. Town Branch distillery in Lexington, Kentucky, is one of the few whiskey distilleries in the U.S. that have purchased copper stills from Forsyths. The reason they did this is simple – the waiting list for Vendome was almost a year long, and Forsyths had stills to sell that had been abandoned by their customer. To even things out, Alltech (Town Branch’s parent company) sent Vendome stills to their operation in Ireland. 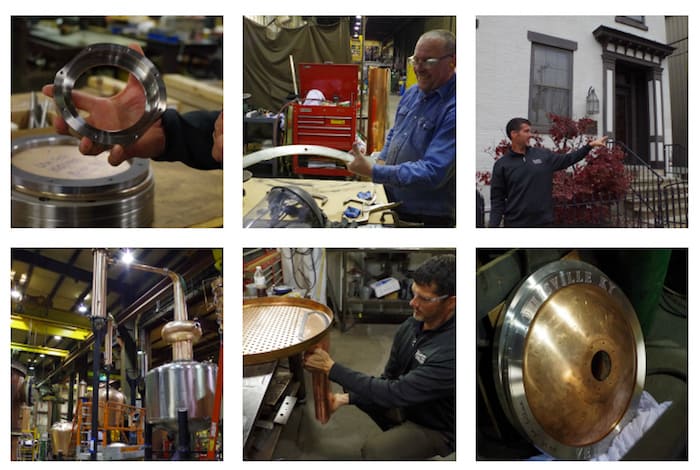 Today Vendome gets orders for four to five new distilleries each month, and the orders for maintenance and replacement parts come in daily. When Vendome President Tom Sherman came to work for his father in 1961, there were only two people working in the shop. Now, there are 70 people working in the shop, and at any given time two to three dozen of them are out in the field installing and maintaining the equipment they helped to fabricate. Equipment maintenance is one of the reasons the wait time for new equipment has gone from nine months to a year just over the last year- they are having to build more time into the schedule to maintain all that equipment they’ve sold over the decades.

In addition to large distillery equipment, Vendome also makes a lot of smaller equipment for craft distilleries. Even larger distilleries are starting to put in smaller distilling operations as part of their visitor experiences. According to Vice President Mike Sherman, they made their first 100 gallon craft still a decade ago on a whim, forecasting a future for craft distilleries. Three years ago, those 100 gallon stills were one of their most popular items.  Last year, moderately sized 500-750 gallon stills were the most popular. Now, continuous column stills are becoming the most popular thing they make because distilleries are wanting to continuously distill in order to meet consumer demand.

The order book for 2016 is already filling up, and the bourbon boom is showing no signs of slowing.  The Shermans expect to see orders from craft distilleries well into the next decade or more. Whether Mike’s children will eventually take over the family business remains to be seen, though he himself started working in the office during breaks from school, and started in the shop drilling holes and eventually welding after college. Both he and his father credit their time in the shop for giving them the foundation to understand every aspect of the family business, most importantly “an appreciation for what our guys do.”

For now, the Sherman family is keeping busy guiding the century-plus-old family business through a serious upturn. Despite the lag time, Vendome is still the preferred manufacturer for copper and stainless distilling equipment.  Each piece is handmade and customized to order, so no two distilleries have exactly the same equipment. Even the copper has to be ordered 6 months in advance from Germany, because the U.S. doesn’t produce copper sheets wide enough for most of Vendome’s products. Judging by the amount of copper Vendome has on hand, they’re not planning on going anywhere any time soon.