According to official tasting notes, Single Barrel #1 is 123.3 proof with a nose of warm baked sugar, with baking spices following behind and southern sweet tea with a vanilla and white pepper finish. Single Barrel #2 is 100 proof with scents of scorched honey pot with notes of caramelized white oak woven within, followed by the taste of honey-kissed black tea with a caramel finish. Uncle Boojie’s Small Batch is 100 proof and tasting notes include vanilla bubble gum and molasses, rounded with a roasted pepper finish, with the subtle scent of campfire and fresh vanilla bean with a faint hint of brine.

As put forth in bourbon lore by the brand, in 1870 the first jugs of bourbon were shipped from the Ohio River ports. The decision to bottle bourbon was a matter of convenience for the consumer as jugs were more attractive and portable than barrels. Paying homage to the historical roots of the Kentucky bourbon industry and the role stoneware jugs played in the shipping and distribution of America’s Native Spirit, the new release comes bottled in classic stoneware jugs handcrafted at Stoneware & Co. – North America’s oldest and largest stoneware manufacturer and one of Kentucky’s oldest continuous operating small businesses. 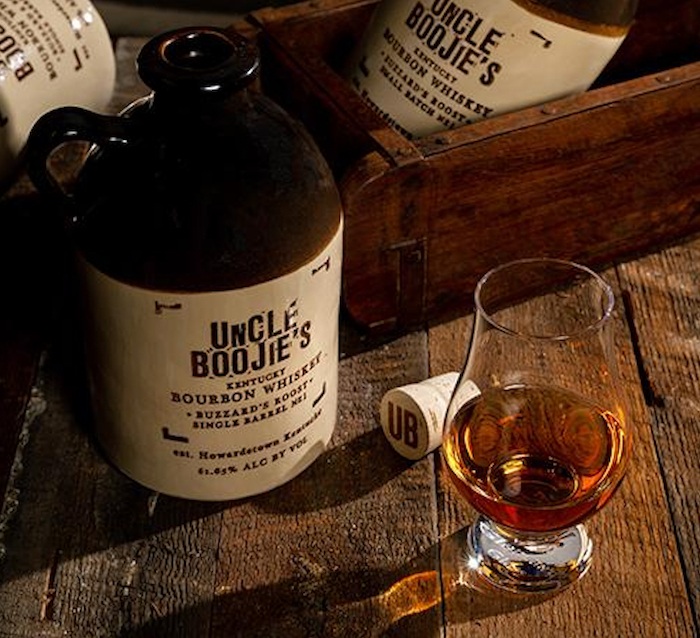 “Uncle Boojie’s Kentucky Straight Bourbon Whiskey is a project built on the fiery passion of my ancestors. Their ‘by any means’ way of life fueled every decision in crafting this first ‘legal’ run of artisan firewater,” Proprietor Steve Smith said in a prepared statement. “My family story begins as my sixth great-grandfather, Scotch-Irish by birth, arrived in ‘Kentucke’ in 1774 with some of the greatest frontiersmen who ever lived. In a constant fight with their fellow man over the essentials of survival, land and resources, each respectively traveled along the Appalachian Mountains and through the Cumberland Gap to cut the Wilderness Trail.

“My grandfather helped build Fort Harrod and unknowingly created the foundation of Kentucky as we know it today. As my grandfather made his journey along this wild terrain, he settled just west of the fort on a land of dense white oak and abundant in limestone-rich streams, called Cartwright’s Creek. This is where the story of Uncle Boojie’s begins.”