Twenty years ago this week, 90,000 barrels of whiskey aging at Heaven Hill Distillery in Bardstown, Kentucky, were lost in a massive and tragic fire that, when looking at TV news footage, resembles a peek into the depths of hell. The loss of liquid that day represented 2 percent of the world’s whiskey stocks at that time, and the destruction of Heaven Hill’s distillery was akin to the death of a family member in the bourbon community.

It was a $30 million hit for the brand ($8 million in lost bourbon, $22 million in ruined facilities), but no lives were lost nor injuries suffered in the conflagration.

Since the tragedy occurred in 1996, when bourbon’s rebound was just beginning, it’s likely few American whiskey fans outside of Kentucky recall the disaster. But had a fire happened now, when bourbon is booming beyond anyone’s expectations, the market impact would be staggering, and Heaven Hill’s whiskey stocks wouldn’t rebound for years.

“The industry came to our rescue, if you will,” says Max Shapira, president of Heaven Hill. His face softens at the memory as he recalls his Kentucky bourbon peers stepping up to contract distill the family-owned company’s products.

“But the times were different,” Shapira resumes, adding that distillers were able to help out because their plants were underutilized. “If something like that happened today to anybody in the industry, there wouldn’t be enough production capacity to be of any help, or enough (excess) inventory to be of any assistance.” 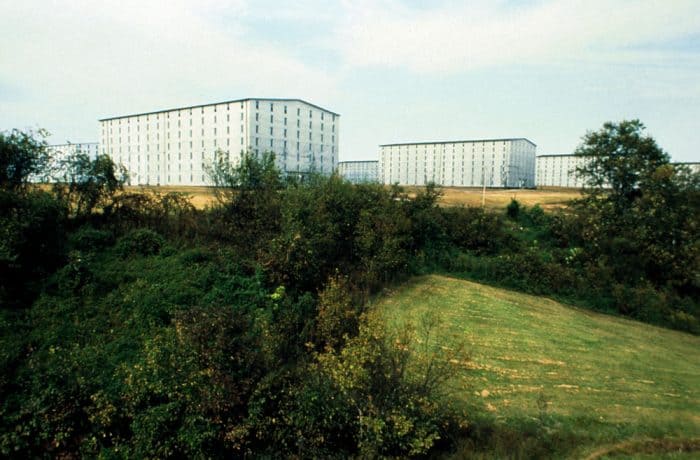 Fire in the Sky

The change from fall to winter in Kentucky can arrive with manic temperature swings and severe storms. That describes the weather on the afternoon of Nov. 7, 1996, when thunderstorms rolled through Bardstown packing 75 mph wind gusts, torrential rains and vivid lightning. Whether the latter sparked a fire in Warehouse No. 1 isn’t known, says Shapira, for the devastation was so complete that there was little evidence for experts to examine.

Rickhouse fires aren’t frequent, but when they begin, they’re nearly impossible to stop. As the initial fire burned out of control, barrel after barrel of high-proof ethanol exploded, sending rivulets of flaming whiskey streaming out of the wooden structure. As wind-whipped flames—some reaching 350 feet into the air—reached other rickhouses, blazing whiskey crept toward others, spreading the fire and triggering further explosions. With seven of 42 rickhouses on fire, a whiskey river formed and flowed downhill into the company’s historic distillery, erected in 1935.

So all-consuming was the blaze that firefighters knew it couldn’t be extinguished until the supplies of whiskey and those rickhouses’ wood were exhausted. Able only to play defense and stop the fire from spreading, fire crews trained their hoses on nearby warehouses to keep them cool.

Drew Kulsveen, master distiller at Willet Distillery, watched the fire from about one-third of a mile away. He recalls watching the flaming whiskey river flow toward a road and creek that divides his family’s property and Heaven Hill’s. Between them were thickets and trees he feared might feed the fire and send flames climbing the slope to his family’s distillery.

“It was awful watching that, just something you keep asking yourself, ‘Am I really seeing this?’” Kulsveen said. “We were seriously scared and thinking the fire could come this far, but it turned out not to be a threat.”

Melissa Swan, then an anchor for Louisville TV station WHAS-11, says her helicopter crew first saw the conflagration from 23 miles away. Handling the voice-over for the live coverage, Swan could hardly believe what she was seeing as the chopper circled the site.

“It was almost like lava flowing down a hillside,” says Swan. Her challenge was to keep talking about the blaze while getting information about what she and viewers were seeing live. “I was thinking about the next thing we could report that might be something of some substance, but we really didn’t quite know what we were looking at. Thankfully people who knew Heaven Hill’s distillery called in to describe what we saw.”

Fortunately for Heaven Hill, its headquarters and bottling plant were located up a hill and a safe distance from the fire. And despite the tragedy, the next day saw production continue as usual. Shapira also put a team in place to find jobs for its distillery workers whose workplace was gone.

“We did not miss a day’s work shipping and processing to customers all around the world, and we didn’t lay anyone off,” he says.

Shapira says the company’s strategy for warehousing its aged stocks also helped it avoid severe product shortages tied to the fire. By mixing barrels of various ages in each warehouse, no particular brand is concentrated and vulnerable to elimination in a fire.

“In any one warehouse you could potentially find some whiskey produced today, some three months ago and whiskey that was up to 20 years old,” he says. Keeping that broad diversity of whiskey in its warehouses “keeps us from facing a large gap in our inventory if something like that were to happen.”

As the company considered plans for rebuilding its distillery, representatives of United Distillers (now Diageo) approached it about a sale of its Bernheim Distillery in Louisville, just 30 minutes away. Shapira could hardly believe his luck. The site was one of the newest distilleries in the bourbon industry, and it had the capacity to replace all of Heaven Hill’s lost production.

“From a technological aspect, it was state of the art, and our master distiller said the stills were perfect for what we wanted to do,” Shapira says. “It was essentially a turnkey purchase, which we made in 1999.”

Symbolic of the brand’s recovery from the fire is a new rickhouse set to open in November at the edge of Bardstown. As the company’s largest, the building will hold 56,000 barrels of aging whiskey—62 percent of the volume lost in the fire and more than double the size of warehouses it erected as recently as 2011. Clearly the bourbon boom continues, and it’s that sentiment that leaves Shapira smiling.

“For us, the fire is ancient history, a significant event, but one in the past,” he says. And just this week, the distillery released a Select Stock 20th Anniversary Fire Edition, which we reviewed here. “All we’re concentrating on now is the bourbon renaissance. We’re pretty excited about that.”

20
Shares
1.8k
Views
Share on FacebookShare on TwitterGet Our Newsletter
Get The Macallan® Rare Cask at ReserveBar. Shop now!