This Is Not The Bourbon Or Rye Whiskey You Seek, Says Researcher

You have two glasses of American whiskey in front of you at a blind tasting that have a similar color. You smell one and think it is bourbon because of its smooth caramel flavor, while the other must be the rye because it comes off as dry and brash. Turns out you are wrong because, at the end of the day, as an average consumer you can’t really tell the difference anyhow between the flavor profiles of the two whiskies, or so argues a Drexel University food scientist in a new study.

Jacob Lahne, PhD, according to Drexel, is an assistant professor in the Center for Hospitality and Sport Management. He found in a blind sorting task of American ryes and bourbons, that “participants were more likely to group together products by brand rather than type of whiskey.”

“There is definitely a tendency for bartenders to talk about how some drinks should absolutely be made with bourbon or rye, and I think it’s clear now that there is more flexibility,” Lahne said in a statement. “In a way it’s fun and exciting — it gives you a bigger universe to play with.” 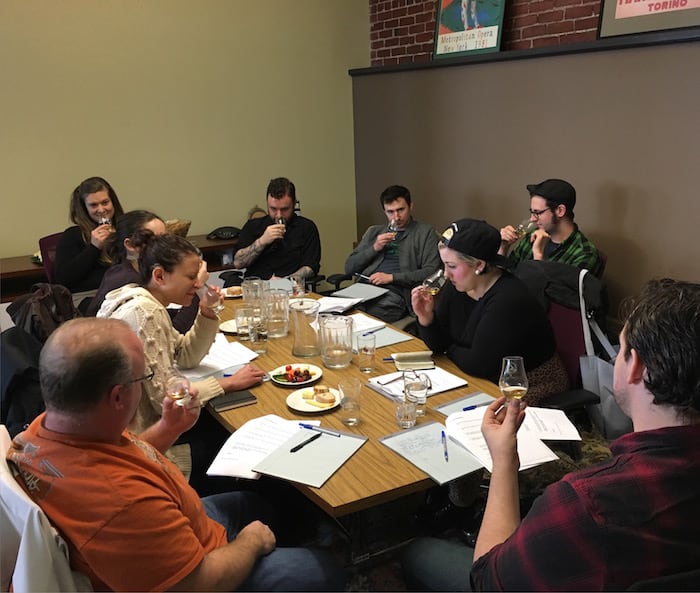 Turns out none of us know how to tell bourbon from rye, or so a researcher argues. (image copyright The Whiskey Wash)

The way Lahne puts it, the only real legal difference between bourbon and rye is the mash bill: bourbon being a simple majority of corn and rye coming from a majority “of its eponymous grain.” His argument is that, otherwise, “the legal and stylistic requirements for the two products are identical. So it’s possible for a 2 percent difference in mashbill to tip a whiskey from one category into the other.”

Now, before you burn the comments section of this article down, first consider his logic and how got to his conclusion. I don’t necessarily agree with his rationale, but it is interesting to see how he played things out as he pondered “how can straight rye and bourbon be so dramatically different, if their basic recipe is so similar?”

To get to the bottom of the conundrum, Lahne presented 21 study participants with trays of 10 anonymized whiskeys — five bourbons and five ryes — in random order. They were instructed to smell but not taste the alcohol. This method is in accordance with published guidelines for Scotch whisky evaluation.

The researchers next used a statistical analysis (called DISTATIS) to interpret the group’s responses. Lahne and his team found that the subjects did not separate the whiskeys based on mashbill (bourbon vs. rye), but instead were more influenced by properties like alcohol content, age at bottling and brand. For instance, participants were very likely to group together Jim Beam whiskeys.

Lahne hypothesizes that the researchers saw this trend because individual makers have strong “house” flavors. Jim Beam whiskeys — both bourbons and ryes — might be characterized as smelling like roasted peanuts.

The perceived differences between bourbon and rye may stem from a time in history when mashbill differences between the two were greater, Lahne said. However, modern American whiskeys that are most popular today are very likely more closely related.

The researcher, having solved this initial question for himself, now aims to expand and explore “how specific sensory attributes — like that peanut aroma — may be linked to producer, alcohol by volume, age, chemical makeup, and other production variables.”

So, do you agree with his findings? Let me know below.