Editor’s Note: This is the seventh in a nine part series chronicling the life of James Crow, an extremely important figure in the history of American whiskey. A chemist originally from Scotland, he is credited by some as having invented the sour mash process. Watch this time slot on Thursdays (11am Pacific Time) for the other articles.

Crow’s legacy passed on to the distillers he trained, who in turn trained a succession of assistant distillers who disseminated his methods and principles to other distilleries until Prohibition. When Crow began work at the upgraded Pepper distillery in the fall of 1840, the first staff working for him were Albert and Dick, slaves of Oscar Pepper. Years later, Albert was promoted from mashing chores to distillation; however, as slaves were denied an education, his lack of literacy and numeracy skills would have been a barrier under Crow’s empirical methods. The man who carried Crow’s ‘sour mash whiskey’ torch was William F Mitchell.

John Goines of Grassy Springs, who lived across the stream from the Labrot & Graham distillery, became the distiller in 1884 continuing until a few years before Prohibition. Van Johnson joined Old Oscar Pepper distillery in August 1869 working the mash floor; he was William Mitchell’s cousin. The prefix ‘Old’ Oscar Pepper distillery was added after Oscar’s death, as was the product designation ‘Old’ Crow whiskey several years after Crow’s death. In February 1872, Van Johnson moved to Gaines, Berry & Company’s second distillery, the new Old Crow distillery to replace his cousin William Mitchell as head distiller. He remained the head distiller until around 1902 where his son, Lee Johnson replaced him. Many distillers continued the Crow legacy as they joined other distilleries in central Kentucky, adapting and organically modifying Crow’s methodologies. 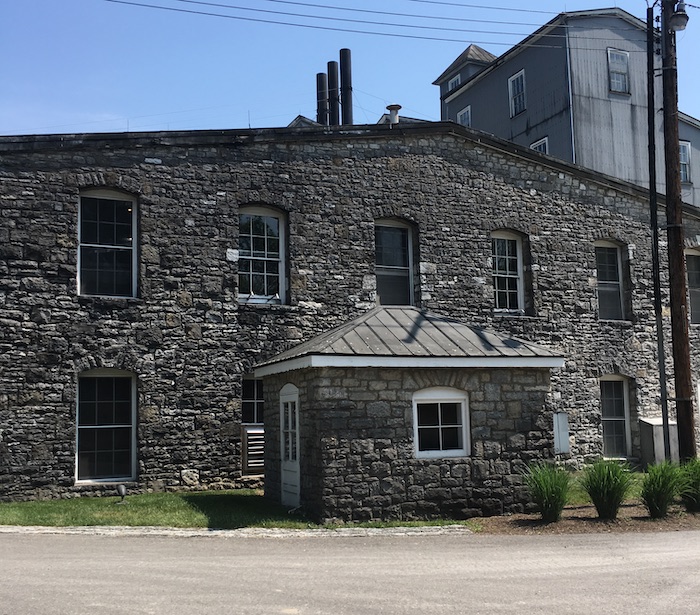 A production building at the Woodford distillery (image via Chris Middleton)

When John Hawkins was head distiller between 1863 and 1864, he later reported in court testimony the warehouse held under one thousand barrels, with maximum daily capacity at 25 bushels. While a decade had passed since Crow left the distillery, there is no evidence of any substantial changes to the equipment or processes, so it is possible to gauge likely production volumes during Crow’s tenure. Over the fifteen years of Crow’s oversight, the alcoholic yield increased from 2.5 proof gallons per bushel in the early 1840s to an average of 3.5 gallons by 1855.

Assuming daily production achieved peak capacity of 25 bushels, the annual production before 1855 was between 16,000 and 18,000 proof gallons; or over 450 barrels – a mix of standard container sizes that varied from 31 to 42 gallons. Distilleries never ran seamlessly, and the Government estimated losses in production time and volume at an average 8% per annum, due to breakdowns, repairs and delays, plus injuries from spoilt grain, ruined ferments, poor distilling cuts and barrel outages.  When Crow left the distillery it was reported to have several hundred barrels in storage, intimating over 10% of barrels were set down for more extended maturation periods, i.e. from four to seven years. Crow regarded whiskey began its ‘ripeness’ between three and four years.

By 1840, of the 10,300 estimated stills in operation in the United States, less than 10% had a total capacity over 200 gallons – the Government measured the taxable accumulative gallon capacity for the different still formats, not the number of stills at the distillery. The Pepper distillery by Kentucky’s standards during the 1840s and 1850s ranked in the top 3% for total capacity. But the distillery produced less than 0.5% of Kentucky’s total spirit volume, highlighting some of the distilleries were of greater size and the larger volumes generated from the semi-continuous wooden charge stills. Kentucky had distilleries capable of producing over 100 gallons in 24 hours, or over 40 bushels a day.

The largest distillery built in Kentucky until after the Civil War was the short-lived Hope distillery in Louisville constructed in 1817, a massive $100,000 investment spread across one hundred acres beside the Ohio River falls. The owners installed a 1,500-gallon wash still and 750-gallon spirit still fabricated in England. In 1819, the year it closed, Hope distilled 1,200 gallons a day. By the mid-1820s, distilleries in Louisville and Cynthiana claimed over 30 bushels a day. Underscoring Oscar Pepper’s scale of operation, it was only one of 49 distilleries in Kentucky that employed a full-time distiller and staffed a dozen workers during the distilling season, including four paid hands along with Pepper’s slaves.

Cost Of Goods At Pepper Distillery

Between 1838 and 1840, a considerable amount of money was invested in capital works in rebuilding the mill and machinery, and constructing the new distillery complex with the latest copper distilling equipment, boiler and plant. It exemplified Oscar Pepper’s optimism and growth potential for Kentucky’s whiskey. Pepper’s farm grew and processed most of the grain, and the surrounding forest supplied timber for fuel, minimizing his working capital costs. Grain and energy represented about 75% of whiskey’s cost of manufacture before the Civil War.

Pepper marginalized his labor expenses by owning two dozen slaves, serving as manual labor for all the agricultural activities about the farm, working the malting floor, milling duties and the physical tasks distilling entailed. Even Pepper’s financial contract for Crow’s remuneration was not a drag on his outgoing expenses as Crow’s income was awarded as one-eighth of the annual production. Pepper’s only external costs were barrels and occasionally buying of grain from neighbors during any seasonal shortfalls. The price of a tight barrel in Kentucky during the 1830s to 1850s climbed from fifty cents to $1.00. The whiskey was reputed to have brought in immediate cash flow as much of the newly distilled whiskey was sold to dealers soon after production.

Pepper and Crow may have required some dealers and spirit merchants to hold an allocation of their inventory in escrow or on financial terms until the whiskey aged to the sensory standard Crow deemed suitable for release. Otherwise, Crow and Pepper whiskey would not have earnt the enviable reputation in a very cluttered and competitive marketplace. Stock held to age four or more years, sold at higher prices, increasing the value per gallon as much as fifty cents for each additional year in barrel. Until September 1862, the Government had no laws levying excise tax or minimum aging requirements in bond, with whiskey sold off the still or after many years in barrels with no taxes applicable. While barrel soak, leakage and evaporation incurred losses of up to 30% over four years, the whiskey more than doubled in value.

The distillery’s spent grain or stillage sustained over a hundred hogs each year, including a small herd of cattle, bringing additional revenue beyond the sale of whiskey, any surplus grain, and the farm’s hemp and flax production. In the 1850 Census, Pepper continued to identify his occupation as farmer, even though two-thirds of the farm’s income came from whiskey.

The retail cost per gallon for whiskey was subject to the distiller’s reputation, its age, transport costs to market before wholesalers and retailers added their mark-ups for consumer purchase. As production volumes increased, the average price per gallon in Kentucky fell from 40 cents in 1805 to 15 cents by the late 1830s. Unaged grain distillate fresh from the still, known as common or green whiskey represented over 90% of consumption and could be bought for 15 cents at the distillery, 20 cents in Louisville, while good whiskey aged three of four years in wood cost 50 cents.

With different classes of whiskey and scales of production, such as wooden bourbon steam stills, cheaper and more inferior quality whiskey, competed with tradition pure copper pot still whiskey. The lowest-priced whiskey was a rectified and industrial-scale corn whiskey from Cincinnati at 11 cents per gallon. In 1845, Kentucky whiskey in Louisville cost 20 cents a gallon, 25 to 30 cents in New Orleans and 60 cents, or more in New York. The whiskey made by Crow at Pepper’s distillery commanded a premium, usually 40 cents a gallon for new whiskey, and 80 cents or more when aged four or more years.

In part 8 next week we take a look at the Old Crow distillery.

14
Shares
825
Views
Share on FacebookShare on TwitterGet Our Newsletter
Get The Glenlivet 18 Year Old at ReserveBar. Shop now!