The Gentleman Bourbon Is Kentucky History In The Making 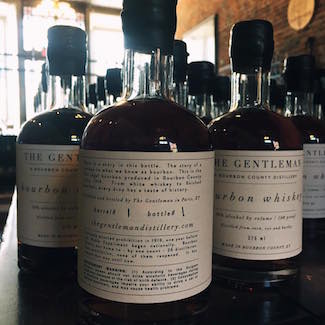 Bourbon. It is a word on the mind of all American whiskey drinkers. It is also the namesake of Bourbon County, Kentucky, a place which once housed a good number of distilleries until that pesky thing known as Prohibition came along and wiped the industry off the map there. No bourbon reportedly has been produced in Bourbon County for around 96 years, that is, until now.

The Gentleman is a boutique distillery located in Paris, Kentucky. More importantly, though, it is said to be the first licensed whiskey making operation in Bourbon County in a really damm long time. It is unfortunate for bourbon lovers from that part of the Bluegrass State it has taken decades to get a new distillery there, but good for those about to unleash this new brown spirit.

As for what’s in the bottle and all that jazz, it is a 375 ml bottling clocking in at a nice 100 proof. It is distilled from a mash bill that includes corn, rye and barley and, as is typical with craft whiskey, is a youngster. The distillery, in answering questions about this bourbon on its Facebook page, indicated it was aged up to five months in small five gallon barrels.

What’s described as a very limited 200 bottle batch will go on sale at the distillery only on Friday, September 18th. It will price for around $35 a bottle, and will likely become a collector’s item for the lucky few able to score the first bourbon in Bourbon County in nearly a century.

379
Shares
458
Views
Share on FacebookShare on TwitterGet Our Newsletter
Get The Macallan® Rare Cask at ReserveBar. Shop now!