Milam & Greene Whiskey, a higher end line up unveiled last year from Ben Milam Whiskey, has a number of whiskeys already in its stable that represent its in house style of whiskey making. The brand is going deeper now into making Texas whiskey, unveiling its first grain to glass, limited edition expression that also falls under the qualifications for being a Certified Texas Whiskey.

The new Milam & Greene Distillery Edition Straight Bourbon Whiskey, according to those behind it, was crafted completely onsite at the distillery in Blanco, Texas. It was distilled from a mash bill of 70% corn, 22% malted rye and 8% malted barley, being influenced by a proprietary yeast recipe created by Jordan Osborne, chief brewer, and longest tenured distillery team member, as well as “the Texan terroir, and careful attention to the selection of casks for aging.” 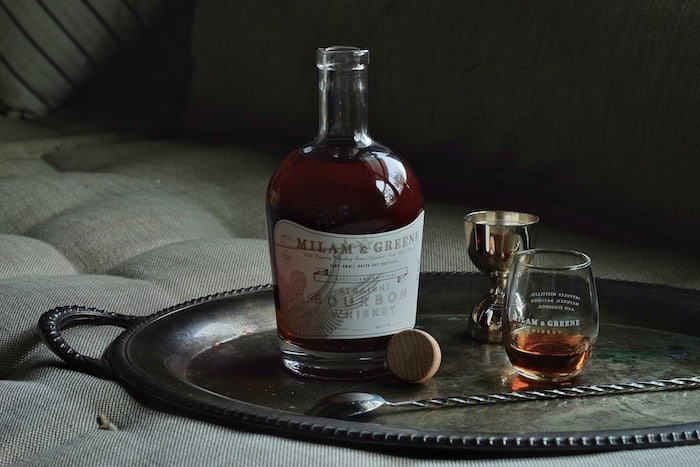 “You only get one first batch,” said Osborne in a prepared statement. “It was an exciting time to fire up the cookers and the still to start making whiskey in a completely new distillery in summer 2017. Right from the get-go, we set out to create special whiskey that would stand on its own alongside some of the finest bourbons in the world. After three years in the making, the wait is over for thirsty whiskey fans.

“We wanted to create a whiskey with the classic bourbon sweetness derived from the corn, married with the pop of spice that comes from a higher rye content. We chose to use malted rye, a unique choice, because it converts the grain’s starch to sugar better than other rye grains we tested.

“This gives our bourbon a peppery spiciness while retaining smoothness and characteristics that are like a wheated bourbon. We think our first grain to glass Bourbon is a great addition to our whisky portfolio.”

The distillery team noted that this new Texas bourbon is non chill-filtered and bottled at a barrel proof 121.9 proof, having been drawn from just seven barrels.

“Bottling whiskey at barrel proof allows people the flexibility to add a dash of water to adjust the strength to his or her taste,” added Milam & Greene Whiskey master distiller, Marlene Holmes. “That is what’s so special and dynamic about them. We can’t wait to hear what people say about it and know that the perfect serve might be different for different palates.”

As it stands now Milam & Greene Distillery Edition Straight Bourbon Whiskey is available exclusively through the Milam & Greene Whiskey website and at the distillery for pickup beginning Saturday, August 22 while supplies last. It will be pricing around $122 per 750 ml bottle, and you’ll find some official tasting notes below. It should be noted as well this is the first offering in the distillery’s new Hill Country Whiskey Series.

Aromas of nuts and baking spices that give way to soft vanillas and chocolates. This classic bourbon has sweetness derived from the corn married with a lot of spicy character that comes from a higher rye content. The malted rye provides pepper and spiciness while retaining smoothness and characteristics that are like a wheated bourbon. It’s luscious and rich, with a lingering finish.