The Samuel Maverick Barrel Proof is pot-distilled and bottled at 114 proof. It’s distilled from a mash of 72% Texas-grown corn, 18% rye, and 10% malted barley, then aged a minimum of two years in new charred white oak barrels.

“We founded Maverick Whiskey in 2017 as a destination distillery in the heart of San Antonio adjacent to the Alamo as a way to celebrate our family and Texas heritage,” said Dr. Kenneth Maverick, founder of Maverick Whiskey, in a prepared statement. “Our distillery, housed in the restored Historic Lockwood Bank Building, carries on the spirit of Samuel Maverick with the potent flavors of our new Barrel Proof Straight Bourbon. Any maverick will appreciate its gusto.” 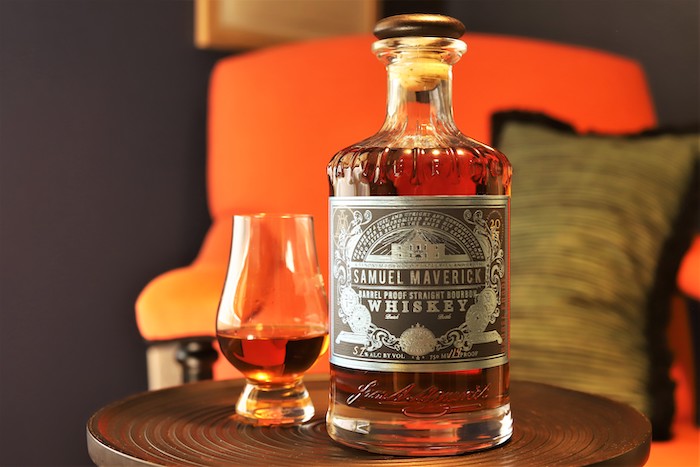 Head Distiller Kevin Graham said that to produce Samuel Maverick Barrel Proof Straight Bourbon Whiskey, they selected the best barrels of Certified Texas Whiskey they could get their hands on. “Once aged, we expertly blend the right barrels to bring out the sweet caramel flavors balanced with just the right pop of spice.”

Samuel Maverick Barrel Proof Straight Bourbon Whiskey distiller’s tasting notes show that the charred oak gives the nose a deep earthiness with notes of vanilla and caramel. The palate is smooth with notes of sweet caramel, cola, and spices. The finish, while silky, has the peppery bite of rye and a touch of mint.

Maverick Whiskey is a distillery, restaurant, and event center dedicated to Sam and Mary Ann Maverick, one of San Antonio’s earliest families. Located near the historic Alamo in San Antonio on the original Maverick family homestead, native son Kenneth Maverick established Maverick Whiskey as a nod to his family’s storied Texas roots and patriarch Sam Maverick.