Still Austin Whiskey recently launched its first limited release cask strength bourbon at in and off-premises establishments throughout the state of Texas and at the distillery’s tasting room.

The homegrown distillery located in the heart of South Austin released 1,100 cases of the new whiskey, a much larger quantity than they usually release. An additional 1,100 cases will be available in September after this first batch, the distillery said in a prepared statement.

The new expression contains the same mash bill as the company’s flagship straight bourbon whiskey — 70% non-GMO white corn, 25% Elbon rye, and 5% wildfire malted barley. However, it doesn’t use the slow water reduction process. This creates a higher-proof whiskey that is a deeper, darker version of its sibling, The Musician. 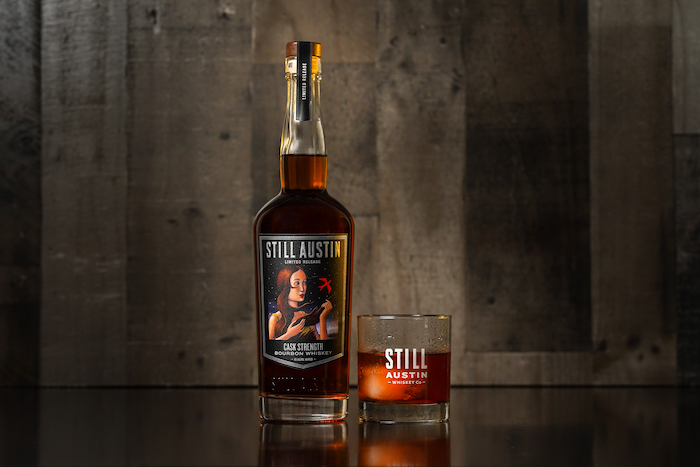 The distilling team asked its master blender, Nancy Fraley, to search through their barrels of straight bourbon to pick the most complex and full-flavored ones. From there, they combined the select barrels and released them at “barrel proof” — meaning the whiskey was bottled at the same proof at which it was aged.

The resulting spirit, according to distillery tasting notes, is a combination of complex, dark flavors with a deep spice finish. It is 118 proof with an alcohol by volume of 59%. On the nose, it has brandied cherries and fresh muddled mint, old-fashioned blackberry cobbler with a biscuit crust, and cinnamon toast in brown butter.

The artwork on the label was created by internationally acclaimed artist and native Texan Marc Burchhardt. The label is a slightly modified version of the Straight Bourbon label, which portrays “archetypical” Austinites. They both pay homage to the people who influenced and inspired the team.

The Cask Strength is now available for purchase for a suggested retail price of $65.