Rolling on the River: Steamboats and Bourbon Lore

Kentucky is blessed with more miles of navigable rivers than any other state in the Union after Alaska. These rivers made it possible for early settlers to transports goods down the Ohio River and the Mississippi River to St. Louis and New Orleans. The trip was long and dangerous, with pirates and outlaws eager to separate ships from their cargo.

Once in New Orleans, the goods would be sold and the flatboat would be sold for its lumber. The tradesmen would then either catch ship in New Orleans and sale around Florida to an East Coast port and come back into Kentucky from the east, or walk back up the Natchez Trace, a dangerous trip in its own right. It took from nine months to a year to make the round trip from Louisville to New Orleans by flatboat. 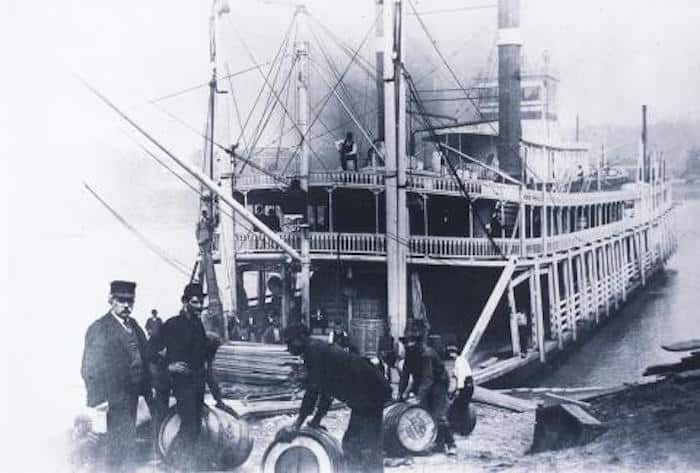 Whiskey being loaded onto a steamboat (image via Lexington History Museum)

Before 1803, trade with Spanish-controlled Louisiana was not very profitable. Early on, the Spanish would not allow legal trade from Kentucky, as they were using trade as a bargaining chip with the new American government. The trade that was being done was illicit. Spanish officials had to be bribed, and there were no legal documents involved. In 1795, a treaty with the Spanish opened up the route to legal trade, but the Spanish took their share of the profits in the form of tariffs and taxes. It was in 1803 that trade with St. Louis and New Orleans became fully open when the United States government purchased Louisiana from Napoleon who had received it from the Spanish two years earlier.

Bourbon on the river

In 1811, the steamboat New Orleans made the trip from Pittsburgh to New Orleans. By the end of the decade, regular steamboat travel between Louisville and New Orleans had been established. These steamboats were workhorses carrying goods between the two cities – and that often included whiskey. The first written record of “Bourbon Whiskey” is from the Western Citizen newspaper from Bourbon County, Kentucky, on June 26, 182, with an advertisement offering Bourbon whiskey for sale.

There is most likely a relationship between the steamboat trade and the popularity of bourbon whiskey. We know from records that the price of whiskey in New Orleans in the years following the Louisiana Purchase was the same in Kentucky as it was in New Orleans. It is in this time that the idea of aging the whiskey in charred oak barrels to make it taste more like French brandy and to increase its value became prominent. Prices of Kentucky whiskey rose, and the reputation of the quality of Kentucky whiskey grew.

Steamboats made bourbon available throughout the West. Passengers would make the trip to New Orleans, and while in the city, they would have a chance to drink the aged whiskey being sold on Bourbon Street. It was less expensive than the French brandy being offered but had a very similar taste, both with barrel flavors of caramel and vanilla sweetness with some oak dryness on the finish. When making the trip back home they would ask for the whiskey they were drinking in New Orleans, on Bourbon Street, that “bourbon” whiskey. The steamboat’s bartender would make sure he kept plenty of this whiskey in stock to serve these passengers. Once home in St. Louis or Memphis or Pittsburgh, these travelers would spread the word about that bourbon whiskey they were drinking in New Orleans.

Steamboats opened many new markets for Kentucky bourbon in the first half of the 19th century. Barrels were shipped to river ports along the Ohio, Mississippi, and Missouri rivers. Bourbon was loaded on ships and taken to California and Europe. It was not until after the American Civil War that steamboats were passed by railroads as the carrier of Kentucky whiskey. Even then, the steamboat remained an import part of the distribution of barrels of bourbon to markets in the United States and elsewhere.

This relationship between bourbon and steamboats is celebrated today by the American Queen Bourbon Cruise. This steamboat travels from St. Louis to Cincinnati, stopping at ports in between. They offer distillery tours by connecting bus, and educational programs about bourbon onboard the ship. It is also remembered by the daily cruises of the Belle of Louisville, which serves bourbon at the bar. Every year during the Derby festival, the Belle of Louisville is host for an event where a single barrel of Four Roses is chosen for the Great Steamboat Race.

Bourbon and steamboats share a rich heritage, and it is hoped that in 2021 that this heritage is honored with a steamboat cruise from Maysville to New Orleans with barrels of Bourbon whiskey from every Kentucky distillery on board to celebrate the bicentennial of that first written record of Kentucky Bourbon Whiskey.

298
Shares
659
Views
Share on FacebookShare on TwitterGet Our Newsletter
Cheers to the Dads! Personalize a bottle of his favorite whiskey to create a modern gift for the modern man. Use code: FATHERSDAY20 for $20 off your next order of $100 or more at ReserveBar