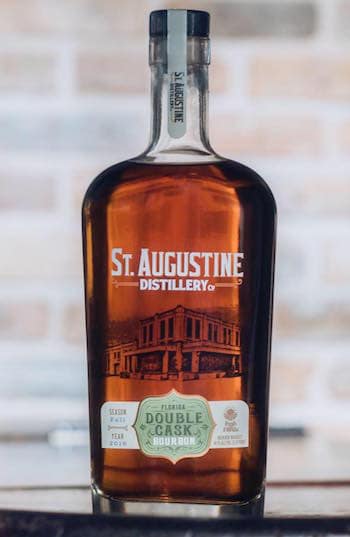 Former Maker’s Mark master distiller Dave Pickerell, besides his WhistlePig and Hillrock Estate distillery pet projects, also lends his whiskey making and consulting skills to many a craft outlet across the country. We covered a few of them in an interview with him some time ago, and if you take a look at his most recent list, you see it is a bit of a who’s who in the young distillery world.

One of those, St. Augustine Distillery out of Florida, is about ready to showcase a Pickerell-influenced expression that’s known as St. Augustine Florida Double Cask Bourbon.

St. Augustine Florida Double Cask Bourbon, according to the distillery, is set to be the first bourbon pulled from barrel in the state of Florida since Prohibition. This has been something of a major endeavor for this operation, as they’ve already put down over 500 barrels of bourbon to draw from. For this first release it has been bottled at 93.8 proof and is a blend, with spirits in the offering ranging from 16 to 28 months in age.

“New federal regulations require the ‘stated age’ be that of the youngest spirit in the blend,” said Philip McDaniel, co-founder and CEO of St. Augustine Distillery, in a prepared statement. “We aged our whiskey in a sequence of new, wine quality 25-gallon and seasoned 53-gallon barrels. To achieve our flavor profile, we hand-selected dozens and dozens of barrels to blend a unique and robust bourbon.”

Besides Pickerell, who designed the distillery’s production facility and guided the final blending, St. Augustine also turned to Jake Norris, founding distiller of Stranahan’s Colorado Whiskey, to develop the mash bill. The two combined give this bourbon something of a superstar pedigree, so expectations on how the first release will taste will likely run high.

“Developed by the best craft distillers in the world, Florida Double Cask Bourbon is a celebration of the Sunshine State, its agriculture and unique maritime climate,” added McDaniel. “Florida’s year-round heat and humidity ages our bourbon faster and with greater intensity than anywhere in the country. Our distillers have a running joke that our barrels ‘age in dog years.’”

Plans currently call for this bourbon to be released first at the distillery’s gift shop on September 9, followed by select retailers, bars and restaurants. It will price at $50 per 750 ml bottle, and very limited official tasting notes are below for your consideration.

Shares
455
Views
Share on FacebookShare on TwitterGet Our Newsletter
Get Jefferson's Ocean at ReserveBar. Shop now!