Eddie Russell, in his role as the master distiller at Wild Turkey, has a wide range of American whiskey barrels sitting around he can play with to create limited releases. One particular brand in regards to this, Russell’s Reserve, is now seeing a new limited release in the form of an older bourbon.

The new Russell’s Reserve 2003, according to those behind it, was aged for a minimum of 16 years inside the distillery’s warehouses. It is described as a unique offering, in part, because it “marks the very last of Russell’s Reserve 107-barrel-entry-proof whiskey. Reminiscent of Wild Turkey releases from the mid-1980s to early 1990s, Eddie had a ‘Eureka!’ moment after tasting these one-of-a-kind barrels.” 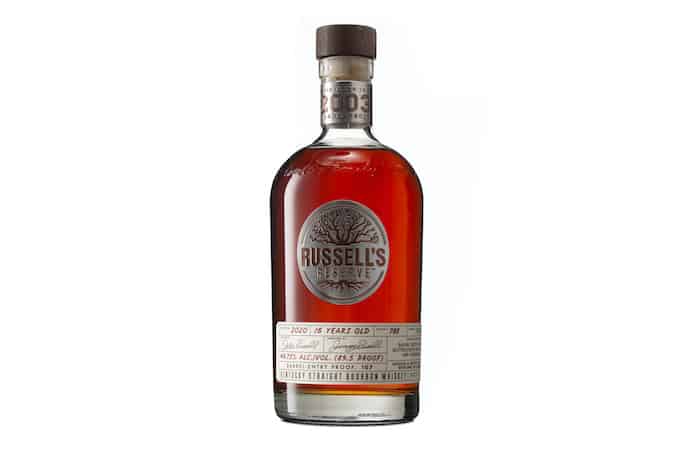 “Experiencing for the first time what would become our 2003 expression was one of those unforgettable moments of pure inspiration,” said Russell in a prepared statement. “It’s one of our most complex bourbons, aged longer than most of our spirits, and speaks to what Russell’s Reserve is about—honoring our heritage.”

This 2003 edition bourbon has been bottled at a barrel strength of 89.5 proof. Approximately 3,600 bottles of each, pricing around $250 per 750 ml bottle, are being made available nationwide at select retailers. Official tasting notes indicate that, “with a dark amber hue and aromas of charred and seasoned oak, the palate reveals bright spice with layers of confectioner’s sugar, burnt caramel, and buttery vanilla and leather. A smoky and smooth finish has lingering oak and sweet notes of caramel and vanilla.”

Russell, for those that don’t know him, is a 39 year veteran of the bourbon industry. He learned the trade from his father, legendary Wild Turkey master distiller Jimmy Russell. Eddie, in releases like this, showcases his deep knowledge of the vast amount of whiskey owned by the distillery.

61
Shares
7.9k
Views
Share on FacebookShare on TwitterGet Our Newsletter
Get The Macallan® Rare Cask at ReserveBar. Shop now!