Rare Bourbons Up For Auction To Support Kentucky Art Museum

When one needs to raise money for a charitable cause in the great bourbon state of Kentucky, one can turn to the local and extremely robust whiskey community there for help. Such is the case with the Speed Art Museum, Kentucky’s largest art museum that was founded in 1927 and located on the campus of the University of Louisville. It is for this cause, on September 19, that some incredibly rare American whiskeys will be up for auction.

The second Art of Bourbon auction, as it is called, will bring together under one roof bourbon bidders, art lovers and the elite of “bourbon royalty,” with such last names as Van Winkle, Brown, Samuels, Henderson and Dedman. Tickets for the event cost $200 (though, as of when we went to press on this, the event was already sold out – online bidding remains an option for the time being), and include a cocktail hour, bourbon tastings and a seated dinner with a bourbon-inspired menu. Event proceeds support the art institution’s education programs and exhibitions. 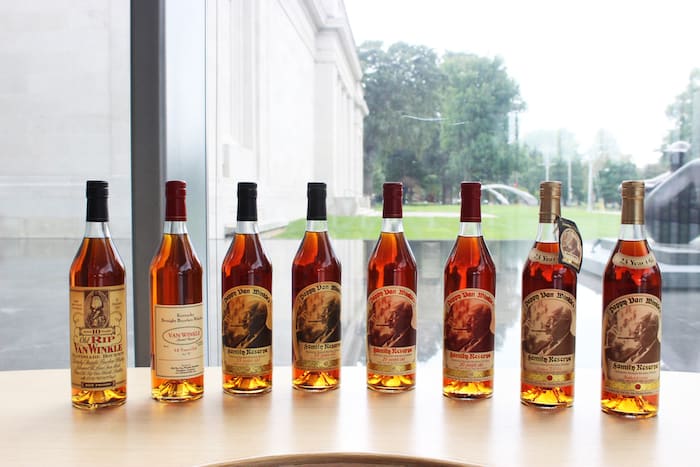 “The Speed Art Museum, Kentucky’s largest and oldest art museum, is proud to have launched the premier, national nonprofit bourbon auction,” said Speed Art Museum Director Stephen Reily in a prepared statement. “For one night only, the Speed will rival the nation’s best bourbon bars so that all year long we can share the best art in the world with all of the people of Kentucky.”

As for what’s up for auction, it truly is one hell of a list. Here’s the full flavor of it based upon information put forth by the museum:

Quite possibly one of the rarest American whiskeys in the world. It was bottled before the government ceased distilling operations in 1942 for the World War II effort, before Maker’s Mark, before the iconic red dripping wax, and before whiskey-maker Bill Samuels Jr.’s father allegedly burned the family recipe. Before all of it.

Referred to as the bourbon so exclusive that even billionaires can’t buy it. But what makes this lot of Pappy Van Winkle even rarer? Five bottles are auctioned as a group. Sold as part of Julian P. Van Winkle III’s private collection, each bottle has been personally signed by Van Winkle specifically for this non-profit auction. This lot could bring as much as $15,000 at auction.

Van Winkle acknowledged that while many collectors and enthusiasts will be eyeing this valuable brown water, he’s particularly pleased the family can support the Speed Museum. “Of course we’re going to donate to the Speed. It’s our way of stepping-up and contributing to a worthwhile cause and I can’t think of a better reason to share Pappy,” said Van Winkle, Pappy’s grandson and a third generation whiskey maker.

So elusive that it’s considered the unicorn of whiskeys and has enough star power to entice the most serious of collectors. It remains today one of the best reviewed, most sought after and rarest old whiskies known. Specifically bottled for the Mellon family and solely auctioned at Christie’s, it hasn’t seen an auction block in years.

Hands down this is considered the best, once-in-a-lifetime experience in American whiskey. As personal guests of Maker’s Mark Chief Distillery Officer Rob Samuels, an 8th generation whiskey maker, the winning bidder and nine friends won’t simply select a barrel at Maker’s Mark Distillery in Loretto, Ky. Instead, the winner gets to create his/her own special Maker’s Mark “taste vision.” Using the same process as head honcho Bill Samuels Jr. did when he created Maker’s 46, the Samuels will work alongside you to formulate a personalized, never-been-made barrel of Maker’s Mark bourbon.

Maker’s Mark upped the ante for the night: Bringing art and bourbon together in a way that only Maker’s Mark can offer, the winner will also receive a rare piece of iconic Dale Chihuly’s glass artwork, gifted from the distillery’s private collection.

“I’ve always felt a deep connection between fine art and the vision my grandparents created at Maker’s Mark, which was all about the painstaking attention to detail it takes to handcraft something truly unique,” said Samuels. “They also believed it was important to give back to the community in meaningful ways. So it seems a natural fit for us to provide this once-in-a-lifetime experience to celebrate that shared vision and support the remarkable work of the Speed Museum.”

This specific bourbon offering has never been offered before and the Chihuly addition further sets the exclusive tone for this auction. The bidder gets a complete Loretto, Ky. experience that no private individual has ever had. To top it off, Maker’s Mark donated a dinner at the distillery’s Star Hill Provisions with a special menu created by Chef Newman Miller, a Top Chef judge.

Bottled during Prohibition, this vintage “dusty bottle” was distilled in Spring 1916 and bottled in 1928 by the James E. Pepper Distillery in Harrison Country, Ky. During Prohibition, six companies could legally sell “medicinal” whiskey, all of it bottled-in-bond at 100 proof and government stamped. This pint, aged 12 years, would have had to be prescribed by a doctor and labeled “medicinal” during a time when it was illegal to sell alcohol but legal to prescribe.

“It’s so rare because these bottles just don’t exist anymore. And as a collector, it’s very frustrating because they’re going extinct,” said Minnick.

Bottled in the late 1990s, this ultra-rare private barrel selection may have been one of the first Buffalo Trace products bottled shortly after the distillery acquired Weller from United Distillers in 1999.

This bottle, which does not come up for auction often, is a 10-year-old wheated bourbon distilled at Stitzel-Weller and bottled at Buffalo Trace. It’s one of the most sought after and legendary bottles because of its link to the W.L. Weller Bourbon Heritage Collection.

“This particular bottle is causing some serious buzz among collectors,” said Minnick. “This seems to be the one that could surprise us all.”

Other notables among the 54 lots offered

In addition to the above auction items, the Art of Bourbon will include other lots of covetable whiskeys and bourbon-related packages. Organizers expect the online portion of the event to draw interest from serious bourbon enthusiasts and connoisseurs from around the globe.

“We wanted our distillery to shine right out of the gate at this auction, so we donated special items that we knew all levels of bourbon collectors would be eyeing,” said Kyle Henderson, of Angle’s Envy. Henderson is the distillery’s production manager and is son and grandson, respectively, of Angel’s Envy legendary co-founders Wes Henderson and Lincoln Henderson.

Angel’s Envy donated a bottle of each 2013-18 Cask and a bottle of the Angel’s Envy grand opening release, the first port barrel ever filled in 2010. This 100-proof port was privately released for the distillery in 2016 and was never available to the public. It could bring as much as $5,000 at the event. “It’s our way of thanking the Speed for continuing to bring arts to the community,” said Henderson.

Louisville-based Brown-Forman pledged its support to the Museum event by donating many high-profile items, including a coveted bottle of Old Forester Birthday Bourbon, 2008.

“It’s funny and, in this case, exciting what we find tucked away in our closets. Uncovering this 2008 Old Forester Birthday Bourbon was a bit of a happy surprise. We’re thrilled it will be part of the Speed auction this year,” said Campbell Brown, president and managing director of Old Forester, and a fifth generation descendent of company founder George Garvin Brown.

That particular Birthday Bourbon release date is widely praised and even given an astounding 96 rating by Whiskey Advocate’s founder John Hansell, who is heralded as having one of the great whiskey palates of a generation.

“You do not come across this much anymore,” said Brown. “Arguably the crowd favorite of the bunch thus far. Hurts a little to put this in an auction, but for the Speed, happy to wave goodbye to this delicious bottle.” It’s estimated to bring $2,500 at auction.

Brown also is donating a bottle of the storied King of Kentucky Bourbon, which could bring as much as $2,000 at auction. The second-year limited release is of a 15-year-old bourbon, presented non-chill filtered at barrel strength.

Another Brown-Forman bottle up for bid: the Woodford Reserve Baccarat Edition. It is the traditional Woodford Reserve that’s aged for an additional three years in XO Cognac casks and bottled in handmade crystal decanters from artists at Baccarat. Having tasted it direct from the barrel, Minnick noted this is the best Cognac finished bourbon he’s ever tasted. However, it’s not widely available and currently only sold in duty free stores. That bottle is estimated to bring $1,500 at auction.

The Speed added sharks to the whiskey mix when Jefferson’s Bourbon founder Trey Zoeller donated a shark-tagging experience aboard the vessel that carries four barrels of Jefferson’s Oceans Bourbon as part of its payload.

The winning bidder gets to travel aboard an at-sea shark laboratory in the North Atlantic Ocean and pick his/her own ocean-going bourbon barrel as part of the entire shark-tagging experience.

For three years, barrels of Jefferson’s Bourbon are aged at sea with the idea that constant movement of the liquid in the barrels age the whiskey faster because more of the liquid is in contact with the wood. “When we tapped into the barrels, it completely exceeded my expectations. The liquid was black, almost syrupy. The sugars had caramelized. It was fantastic,” said Zoeller. (Auction estimate: $12,000 – $17,000)

43
Shares
2.7k
Views
Share on FacebookShare on TwitterGet Our Newsletter
Get The Macallan® Rare Cask at ReserveBar. Shop now!