The Pinhook Bourbon brand is a non-distilling producer label started in Kentucky in 2010. Its stated mission is “to bring the concept of vintages to bourbon and celebrate the tradition of Kentucky horse racing.” As is very common with whiskey start ups like them, sourcing for their releases has come to date from MGP produced whiskeys. 2020 has changed that however, with its latest bottling being drawn from whiskey produced for them at the revived Old Taylor distillery in Kentucky, known these days as Castle & Key.

The new Pinhook Bohemian Bourbon Kentucky Straight Bourbon Whiskey, according to those behind it, is drawn from the first set of bourbon barrels released from the former Old Taylor distillery since 1972. Said barrels started a trend in which the brand now does all aging, blending and bottling at Castle & Key and, since 2017, Pinhook has been distilling proprietary mash bills of bourbon and rye there as well. 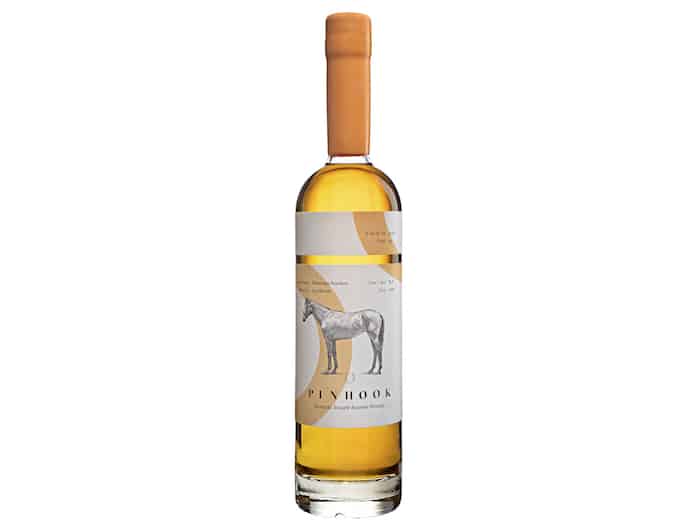 For this specific release it is Pinhook’s flagship bourbon, being distilled from a mash bill of 75% corn, 15% rye and 10% malted barley. It also follows the the April launch of Bohemian Bourbon High Proof, which was drawn from the same custom-distilled barrels. This latter offering, however, was just a fraction of the other’s production size and also extremely limited in availability. Still, it is noteworthy for being the very first bourbon to come from the old site since the time frame previously mentioned.

“Pinhook has no target flavor profile, only an ethos to produce the best whiskey with each and every vintage,” said Sean Josephs, Pinhook Taster and co-founder, who oversees the whiskey distillation, barrel selection, blending, and proofing process, in a prepared statement. “Distilled with ground-fed, limestone-filtered spring water straight from the source, Bohemian Bourbon joins our portfolio of whiskeys that each represent the best attributes of their respective barrels and have a character as special as the thorough- bred horse on its label.”

Plans call for Bohemian Bourbon, bottled at 47.5% ABV and pricing around $38 per 750 ml bottle, to be available this month from retailers in 25 states. Limited official tasting notes suggest it has “aromas of orange peel, candied pecans, clove,and wet stone, met with a palate of tropical fruit and caramel, leading to a finish of almond and cinnamon.”

For the curious, Pinhook noted that each of its vintages “honors a unique, promising young thoroughbred at Bourbon Lane Stables, a racing partnership managed by Pinhook affiliate McMahon & Hill. In another first for the brand, Bohemian Bourbon is the only Pinhook vintage to date to feature a filly rather than a colt.”