Some Perspective on the Barton Whiskey Warehouse Collapse

Two weeks ago, we told you about the partial collapse of Warehouse 30 at the Barton 1792 Distillery in Bardstown, Kentucky. On July 4, not surprisingly, the rest of it came down. The photographs and videos are certainly dramatic, approximately 18,000 barrels of whiskey, each one holding 53 gallons and weighing 500 pounds, in a massive pile, with pieces of the roof and other debris scattered about.

No one was injured in either collapse.

The story is all over social media and many people are blowing it way out of proportion. Obviously, it is a bad accident, but it doesn’t imperil Sazerac, the distillery’s owner, nor will it have a significant impact on the industry as a whole. It is a drop in the bucket. There are currently 6,657,063 barrels of whiskey aging in Kentucky. The barrels affected in this incident represent about 1/3 of 1% of that total, and that’s just in Kentucky. There are a few million more aging in Tennessee, Indiana, and other states. 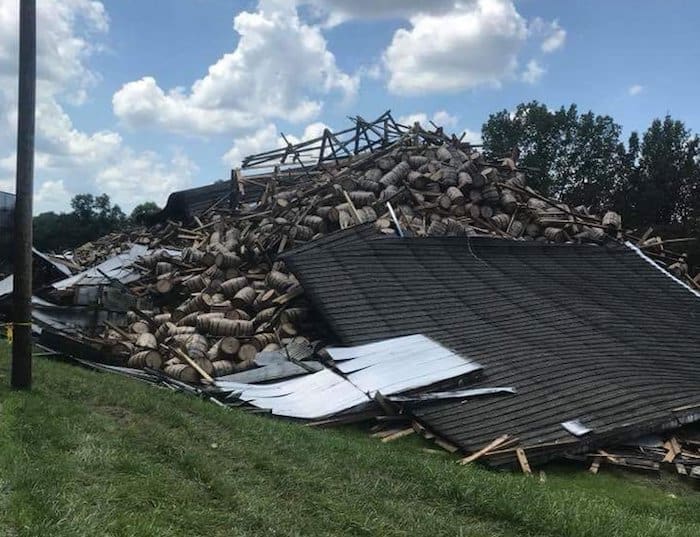 Although they are rare, events like this do happen. As a precaution, every warehouse contains a mix of different products at different ages, mitigating the impact of accidents on inventory planning.

The warehouse was about 80 years old. It was a wooden structure, covered with a thin steel skin. While the exact cause has not been determined, it isn’t hard to figure out the factors that may have been involved: an old, wooden building; a very wet spring, and a tremendous amount of weight. These things happen from time to time. The most unusual fact about this incident is that there wasn’t a fire. There usually is a fire.

As it is, the biggest concern is keeping whiskey from smashed or leaking barrels from getting into the creeks that surround the site, which all empty into the Beech Fork River. If you watch one of the longer videos, you can see there is a massive earthmoving operation going on at the base of the hill, creating a barrier to keep the alcohol out of the stream.

After the initial collapse, the Kentucky Environmental Protection Agency reported that approximately 500 fish were killed. When alcohol gets into a waterway, algae feed on it and deplete the water of oxygen. The fish die of asphyxiation.

After a warehouse at Wild Turkey collapsed and burned in May of 2000, officials of the Kentucky Department of Fish and Wildlife Resources announced that a 28-mile-long ‘dead zone’ was floating down the Kentucky River with the current, killing everything in its path. It was the worst fish kill in Kentucky history. About 227,000 fish died, including paddlefish, catfish, shiner minnows, spoonbills, carp, gar and saugers. Wild Turkey was assessed and paid a large fine.

As you can see from the pictures, many of the barrels appear to be intact. They are made from white oak, which is pretty stout stuff. There are no estimates yet as to how many can be salvaged, and the effort will take a long time. Barrels will literally have to be removed one by one, probably using some kind of crane to avoid disturbing the pile.

There probably were distilleries on the Barton 1792 site before 1876, but that was the year Tom Moore and Ben Mattingly established the Mattingly & Moore Distillery there, with financial help from John Willett, Mattingly’s father-in-law. Moore’s mother was a Willett too, so it was all in the family. In 1879. Moore established the Tom Moore Distillery right next door and that is the plant that eventually became Barton. (The year 1792, which is the name of the distillery’s flagship product, is the year Kentucky became a U.S. state. It otherwise has no significance to the history of the distillery.)

Barton is pretty ideally situated on the edge of Bardstown. The distillery itself is in the valley, at the spring. Most of the warehouses are on a high plateau above it, to maximize air circulation. Although a small part of one original building was incorporated into the distillery, most of it was built in the 1940s. Sazerac bought it in January of 2009. Sazerac also owns the Buffalo Trace Distillery in Frankfort, and a maturation and bottling operation in Owensboro at the site of the Glenmore Distillery.

Although this accident is surely unfortunate, and the clean-up will be costly and time consuming, everything and everyone is going to be just fine.

Editor’s Note: This article appears courtesy of its author.