The phone calls and emails pick up this time of the year at the J.P. Van Winkle and Son headquarters in Louisville, Kentucky.  People are, of course, looking to score a bottle of the coveted whiskey.  The closest most people will be able to come to owning a bottle, Julian P. Van Winkle III told us during a recent visit to the shrine of all things Pappy Van Winkle, is ordering merchandise from Pappy and Co., the online company his daughters run.

“We’ve never paid anyone to mention our products and we’ve never given anyone live product,” says Preston Van Winkle, Julian’s son.  Pappy Van Winkle has been featured in The Internship, Justified, Crazy Stupid Love, CSI LA, and country music singer Luke Bryant even has a dog named Pappy.  “We have never sought out the entertainment industry,” Preston notes, adding they did authorize the appearance in Crazy Stupid Love but that the others caught them completely by surprise.

The History Of Van Winkle

Julian P. Van Winkle, Sr. started in the whiskey business almost by accident as a salesman for W.L. Weller and Sons, eventually buying the business with fellow salesman Alex T. Farnsley before Prohibition, merging with the Stitzel Distillery right before Prohibition.  After Prohibition he and his business partners, Arthur Phillips Stitzel and Alex T. Farneley, started Stitzel-Weller Distillery in Shively, Kentucky.  It opened on Derby Day 1935.  His son,  Julian P. Van Winkle, Jr., ran the family business after Pappy’s death in 1965, but he was forced to sell the distillery by family and shareholders in 1972.  He started the J.P. Van Winkle & Son company at that time, and Julian P. Van Winkle III joined his father in the family business in 1977, a few years after graduating college.  Today the business is run by Julian III and his son Preston in the same building where Julian’s father located the business in the early 1970s.

Old Rip Van Winkle was a pre-Prohibition era label owned by Charlie Farnsley.  Julian P. Van Winkle, Jr., bought the label in the 1950s., selling both regular and decanter bottles of Old Rip Van Winkle.  “Whiskey wasn’t popular but the decanters were until they priced themselves out of the market,” says Julian of the volatile whiskey market of the 1970s and 80s.  Julian III continued to sell the decanters bearing the Old Rip Van Winkle label after his father’s death in 1981.

Contrary to popular belief, Julian P. Van Winkle, Jr. did not start a distillery after selling Stitzel-Weller, but rather his whiskey business bought and bottled under contract from other distilleries.

Bottling was done at Stitzel-Weller until Julian Jr.’s death in 1981, when Stitzel-Weller ended the business relationship.  Julian III began contract bottling in Lawrenceburg at the Hoffman Distillery, but when that company went out of business in 1983, Julian III was forced to buy the facility in order to keep the family business going.

“It about killed me. That was the part that was pretty tough,” Julian III recalls of the financial drain that owning an old facility put on his business.  “Any profit went into the bottling line and business.”  The nice thing about being out in Lawrenceburg, he recounts, is that whenever he had a breakdown or needed help, someone from nearby Wild Turkey would come to his aid.  Jimmy Russell even showed up to help from time to time.

The place flooded twice, and Preston laughs as he remembers shoveling mud out of the basement.  Julian remembers removing a cleaning rag that had gotten stuck in the filling machine with a flashlight and coat hanger.  Sadly during one of the floods when there was 3-4 foot deep water in the basement, many of the china bottles stored down there had to go into the dumpster.  “Things got better when I started selling just the whiskey,” Julian says. 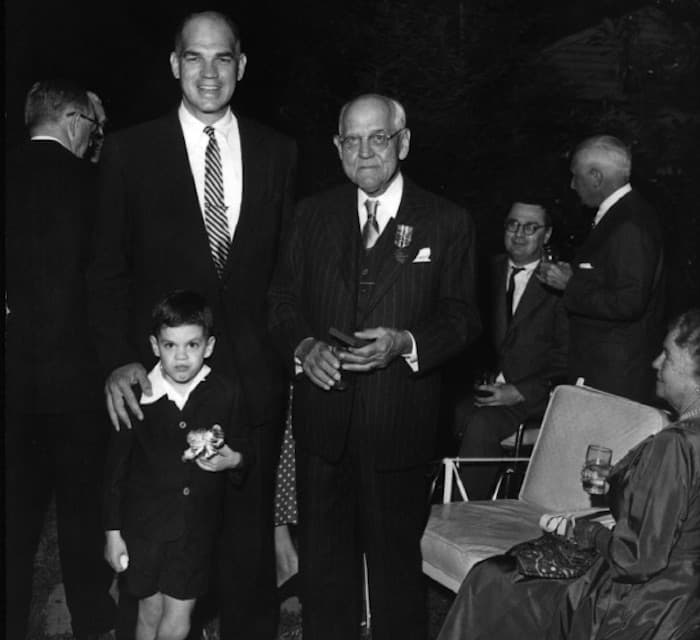 An old family photo of Pappy, with his son Julian Jr., and grandson, Julian III. (image via Van Winkle family)

One thing there was no shortage of during that time was whiskey.  “Everyone bought whiskey from everyone,” Julian noted, adding that some Old Boone became available.  This is what was in those first bottles of Pappy 20 year that were judged to be a 99 by the Beverage Tasting Institute, notable because it used rye as the flavoring grain instead of the wheat recipe that is in current highly sought-after bottles.  A distributor in Chicago had sent a bottle to be judged without the knowledge of the Van Winkle family, so the accolades came as a complete surprise.

The Pappy Van Winkle label didn’t come about until the mid 1990s when Julian found the now-famous photograph of Julian, Sr. smoking a cigar.  Pappy started as a 20 year bourbon and later added a 23 year bourbon.  As the barrels of Old Boone ran out, they switched to exclusively wheated Stitzel-Weller juice in 1998, at the same time they made the switch to clear bottles.   The wheated version was also submitted to the Beverage Tasting Institute and scored a 99.

Bottle identification is another thing that keeps their phones ringing.  Collectors want to know what bourbon, what recipe, and when it was bottled, but there’s really no good way of knowing.  “We were just flying by the seat of our pants back then,” laughs Julian.  Preston adds, “Who knew that anyone would ever give a damn,” adding, “We get a lot of calls and emails about that.  There are a lot of bloggers that have tried to lay out a timeline.”  There are little telltale signs that can give you an idea, such as the color of the glass and whether the label is pressure stamped, but since the demise of tax stamps the information just isn’t that easy to come by.  They didn’t start time stamping bottles until 2006 or 2007. 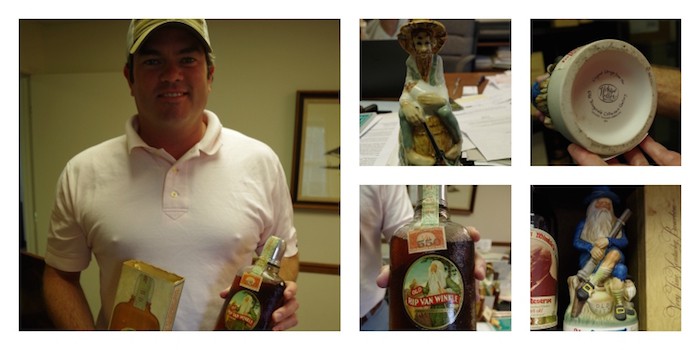 Since 2002, Van Winkle has had a contract with Buffalo Trace for distillation and bottling using a wheated recipe for the bourbon.  There are all kinds of rumors surrounding the brand, including rumors they sell most of it to export markets and that’s why it’s so hard to come by.  “We didn’t sell one drop to Asia, though it may end up there,” says Julian.  They’ve pulled back their exports significantly, only selling to loyal customers who bought their whiskey when no one else would.  Today Van Winkle’s exports are a mere 1% of their business.

The Van Winkles still get asked on a daily basis if they can get any Pappy, and Julian has been seen wearing a t-shirt from a liquor store in Atlanta that proclaims, “Yes, we have no Pappy.”  There are usually a few messages on the machine when he and Preston get to the office in the morning from people seeking various forms of assistance.  They will be auctioning off a few bottles at the Drew Estate Kentucky Barn Smoker in October, though that event is already sold out.  For now, your best bet for getting a bottle will be camping out at the liquor store.

Through all the trials and tribulations of the whiskey business, the Van Winkles have managed to build a brand with worldwide name recognition.  Though Julian P. Van Winkle III says, “We got lucky,” it’s clear that it was a little more than luck that skyrocketed this brand to the status it enjoys today.