If you met Pamela Heilmann on the street, you’d never assume she was a master distiller. Rightly or wrongly, subtly or overtly, tradition dictates that master distillers are men like Jim Beam’s Fred Noe, Michter’s Willie Pratt and Wild Turkey’s Jimmy Russell: large, square shouldered small town boys who cast broad shadows with every ponderous step. That the visage of a 5’2”, bespectacled, and quick-footed woman isn’t conjured up as easily is just the way it is.

For now, anyway, because the whiskey business is a changin’. In late October, Heilmann succeeded Willie Pratt as master distiller at Michter’s Whiskeys in Shively, a suburb of Louisville. The change made Pratt the brand’s master distiller emeritus, while Heilmann became one of the Bluegrass State’s first female master distillers, including being the first one at a facility currently producing whiskey. She said the new title simultaneously elicits pride and humility.

“It’s obviously the apex of my career and something you think you’ll never achieve or do,” said Heilmann. “But I didn’t set my sights on being a master distiller when I first started in this industry 18 years ago.”

The Syracuse, New York, native grew up imagining she’d be a school teacher. Yet instead Heilmann has excelled in multiple male-dominated industries, such as agricultural machinery, steel and now distilling. No matter the position for which she was hired, she was continually bumped upward and into supervisory and leadership roles.

While working in the metallurgical division of Syracuse-based Crucible Industries, she and husband Marty Heilmann were transferred to its Elizabethtown, Kentucky, magnetics operation. But after a time, her husband sensed changes at the company would see Pam lose her position, and he suggested she find a new job. Someone suggested she apply at Jim Beam, and she was hired as a relief supervisor at its Booker Noe Plant in Boston, Ky. The company’s complex and busy operations fascinated her, and she found herself drawn into the work nearly around the clock. 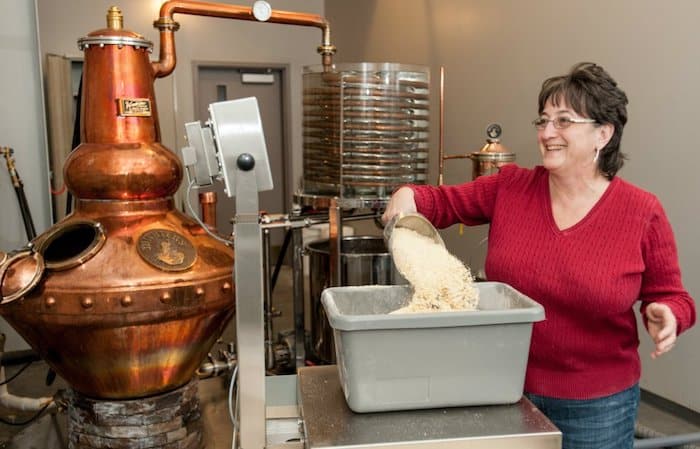 “I’d work in Clermont some days and Boston other days … and I’d change shifts between the two all the time,” she said. “It about drove Marty crazy, but I really loved it. I loved the process, the precision of it, the science behind it.”

Six years later she was made distillery manager at the Booker Noe Plant, a job that saw her help expand the operation and scale up production from 8,600 bushels of grain per day to 13,500. The growth spurt made it the world’s largest bourbon distillery, and broadened Heilmann’s distilling knowledge significantly.

“I’m one of those people who’s easily bored and has to be challenged all the time,” she said. One of her favorite mentors was Jerry Dalton, the lesser-known master distiller who served three years in the role between Booker and Fred Noe. “I can’t tell you how much I learned from that man. He was incredible.”

Even after 15 years with Beam, Heilmann wasn’t looking for a new job. But an offer made by Michter’s president, Joe Magliocco, to build a new distillery in Shively from the ground up was too good to ignore.

“The opportunity to start something from nothing … is not an opportunity you get very often,” Heilmann said.

She’d experienced the thrill of running a bourbon-making behemoth, but now it was time to put her stamp on a smaller operation. (For comparison’s sake, Michter’s cooks two 8,000 gallon mashes in an eight-hour period, whereas the Booker Noe Plant cooks 15 equal-sized mashes in the same time.) Magliocco’s vision, she said, was to make the best quality whiskey possible, and she wanted to be a part of that.

“Lots of times you get away from that in a huge corporation, where it can be all about the dollar rather than about making it be the best quality,” she said. “I really felt strongly about that.”

When Michter’s fired up its gleaming, 40-foot Vendome column still in August of 2015, Heilmann said things ran surprisingly smooth, “because usually you have some problems. But it went great.” Yields were high, the whiskey passed Pratt’s muster and barreling began shortly after. One day at the distillery, when Magliocco stopped Heilmann to ask how things were going, the boss threw her an unexpected curveball.

“For me, that was my first real in-operations slap in the face to say, ‘Pam it is about the quality.’”

In her new role, Heilmann also receives the unofficial and lesser-known title of “Dr. No.” The nickname was given Pratt by the Michter’s sales team, who tired of him saying no to market releases of high-demand whiskey before it met his standards. Going forward, she’ll be assisted in that decision making by Andrea Wilson, the brand’s vice president and general manager, who added master of maturation duties in the wake of Pratt’s semi-retirement.

“I’ll like being Dr. No,” Heilmann said, smiling, “because it’ll keep me focused on what we’re striving to achieve here.”

If all goes well this year, two other Kentucky distilleries will come on line under the leadership of women master distillers: Marianne Barnes at the controls of Castle & Key, and Lisa Wicker doing the same at Preservation Distillery. Heilmann knows both and said she’s proud of their achievements, and she’s looking forward to collaborating with them in the same way her male peers have done for decades.

“Marianne and Lisa are great women who are up and coming, while I’m kind of at the tail end of my career,” she said. “I love helping women in this industry.”

And not just women. With her ascension to master distiller, Dan McKee, a longtime Beam coworker who followed her to Michter’s, takes on the role of distiller. She’s also remained good friends with many of her former coworkers at Beam, who took time during the brand’s October strike to congratulate her on the promotion.

“That really meant a lot to get messages from them—‘Congratulations, Pam, good job,’—when we announced it,” she said. “I learned so much from those awesome people there, master distillers and 40-year veteran (plant) operators, everybody. … They’re what made me what I am today.”