When news spread that Four Roses’ Brent Elliott was awarded Master Distiller/Blender of the year at the 2020 Icons of Whisky America ceremony on Feb. 11, the industry shared a collective smile. Not only had a nice guy finished first, many knew Elliott was a man whose ascension to the master distiller’s role at Four Roses in 2015 was no small challenge. This award acknowledged he’d overcome it.

Elliott was filling the vacancy left by the legendary Jim Rutledge, the master distiller and leader widely credited with changing Four Roses Bourbon from forgettable to remarkable. Beloved and respected by his team, Rutledge was a force of nature and the kind of person required to lead one of the most significant turnarounds ever effected in American distilling.

Just a year shy of notching 50 years in distilling, Rutledge and Four Roses’ leadership were at loggerheads over his role at the company. At age 71, Rutledge had had his fill of traveling, wanted to return to full-time making whiskey making and assured his bosses that many good distilling years remained in him. But when Four Roses argued his well-recognized role in marketing the brand made him too valuable to leave in Lawrenceburg, Rutledge, a victim of his own Sisyphusian toil, chose retirement.

Meanwhile, Elliott, then the distillery’s director of quality, was offered the job and accepted it, albeit with some trepidation. Not only would he be expected to perpetuate Rutledge’s impressive accomplishments, he’d be deeply involved in Four Roses’ upcoming disruptive expansion that would double production in a distillery never designed for such volume.

Oh, and another thing they told him: Get used to public speaking—post haste. Like many master distillers of his generation, Rutledge’s commanding manner saw him segue smoothly from distillery boss to brand ambassador. Elliott, however, had some extra-personal work to do to. A chemist by trade, Elliott was fond of long hours in laboratories with phlegmatic personalities who found conversation optional. 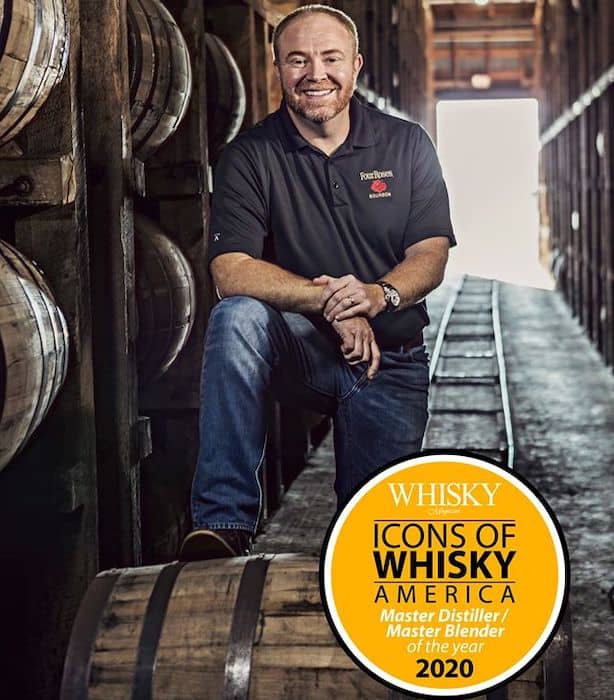 Yet, as fate would have it, his first Four Roses-related speech came soon after his appointment: a shove-into-the-deep-end-and-swim presentation at the brand’s annual Let’s Talk Bourbon event. Held at the distillery during September’s Kentucky Bourbon Festival week, busloads of Four Roses fans rolled in to hear the new master distiller talk about whiskey making. Though officially gone, Rutledge was there to say goodbye to admirers and introduce his replacement.

“I was always petrified of speaking in front of people, which is one reason why I chose a career as a chemist,” Elliott told me. As the master distiller, “I knew I’d lead some VIP experiences, which would be fine since those are small groups, and I’d be talking about whiskey. But public speaking was a big transition for me.”

Though noticeably nervous that morning, he’s adjusted well. Really well. Ask any reporter who’s watched him over the last four years and they’ll tell you his increased confidence and carriage in the spotlight are obvious.

“I still get nervous doing it, but it doesn’t bother me like it did,” said Elliott. “If you do it long enough and frequently enough, you get better at it. Especially when you know and love the material.”

When he was called to the stage to accept his Master Distiller/Blender award in New York, he said he had a speech ready.

“This award is well deserved, if not altogether overdue. It’s about time,” Elliott joked, as he often does. “Maybe it’s best not to print that.”

Sorry, Mr. Elliott, but I couldn’t resist. The joke was too funny and showed your self-effacing humor. Too few get to enjoy that part of you. It also shows your natural-born knack for Kentucky sarcasm. And, as he added, “Really, though, there was no chance to give a speech, which I hadn’t planned at all. They just took a couple of pictures of us with our awards, and that was about it.”

Elliott didn’t receive a hero’s welcome upon return from New York to Lawrenceburg. It was just as he wanted: a largely a back-to-work day peppered with coworkers’ congratulations and the constant buzzing of his smart phone with at-a-boys from industry peers. The way he sees it, he got the award for doing his job, which is what he and his team at Four Roses do.

“This is just an affirmation that what everyone here is doing is right,” he said. “We get so focused on the hard work and dedication to our jobs that we don’t take the time to sit back and say, look what we’ve done and pat ourselves on the back. We need to take the time to say, ‘Good, this is nice.’ We should enjoy this because it’s an affirmation of what we’ve been doing.

“The company has to have a master distiller to be the face of the brand, but a bunch us of are involved in making Four Roses, selling and marketing it. Every bit of this is a team effort.”

The public praise Elliott said he does like are compliments from visitors to Four Roses distillery.

“Most people can work their entire life and have no one say, ‘Thanks for the good job you do,’” said Elliott, who, in 2019, executed Four Roses’ first new product launch in 13 years, the herbaceous and delicious Small Batch Select Bourbon. “But on any given day, when I’m out walking around the distillery, inevitably I run into a tour group or swing by gift shop, and people say, ‘Great job! We love your whiskey and what you do!’

“I love about every aspect of my job: the blending, the chemistry that goes into it, the science, and figuring out how things work because that’s what whiskey is. But hearing people’s gratitude … that never gets old.”