Opinion: Is 95% Of The World’s Bourbon Truly Made In Kentucky?

Which is it? When you know all the facts, you see it’s actually both. In all fairness to both brands, the claim simply means less than it seems. It tells you something, but not everything. It’s true only as far as it goes. The full answer is nuanced and qualified. That’s how reality is most of the time, but advertising doesn’t play well with nuance. It needs claims that are clear, direct, and persuasive.

It is the same with this oft-repeated claim:

“Kentucky is the birthplace of Bourbon, crafting 95 percent of the world’s supply.”

Is that, indeed, a fact? Not necessarily. You can be excused for believing it’s a fact because it appears under the words “Bourbon Facts” on the Kentucky Distillers’ Association (KDA) web site. 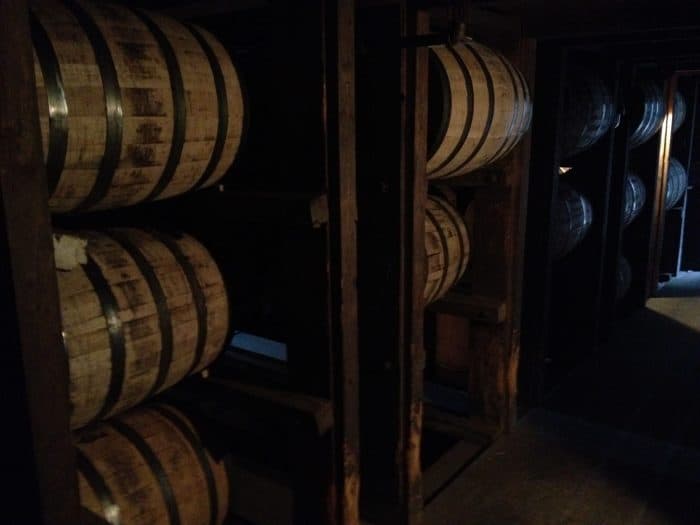 There be bourbon in those barrels (image copyright The Whiskey Wash)

Eric Gregory is long-time president of the KDA. He has freely admitted that the claim originated with him and was, to put the best possible face on it, a seat-of-the-pants estimate or, if you prefer, a guess. He has expressed amazement and amusement that it has been accepted and widely repeated as fact.

Was it a good guess? Is he right?

As the saying goes, it depends.

The claim has persisted and is promoted by the KDA because it serves that organization’s purposes and in the precise way they frame it, the claim is probably close to being true. Its accuracy depends on what you mean by “bourbon.” If by “bourbon” you mean products that say “bourbon whiskey” on the label, then 95% may be too low. When Gregory first said it, there were only two distilleries outside of Kentucky making a whiskey that was labeled and sold as bourbon. They were A. Smith Bowman in Virginia, which made Virginia Gentleman, and Seagram’s in Indiana (now MGP), which made bourbon that was mostly sold outside the U.S. There may even then have been a couple of craft distilleries making bourbon outside of Kentucky, but they didn’t make enough of it to matter. Bowman and Seagram’s made so little that it probably didn’t amount to even the 5% allocated to them by Gregory.

Which brings us back to Jack Daniel’s, always the elephant in the room when we talk about bourbon and Kentucky. Jack Daniel’s is bourbon in all but name. So is George Dickel. Their use of the term “Tennessee whiskey” instead of bourbon is a choice, adopted long ago in part because bourbon is so closely associated with Kentucky. Between them, their volume (approximately 90% of which is Daniel’s) is about one-fourth of the bourbon-style whiskey category. That makes Kentucky, at best, the producer of about 75% of the “world’s bourbon supply.”

In the business, the term “bourbon” is shorthand for American whiskey. Nobody breaks out bourbon, much less Kentucky bourbon, as a category. The numbers are for American whiskey, distinguishing straight whiskey from blends in most cases but that’s about it. The straight whiskey segment was almost all bourbon and Tennessee whiskey until recently, with the resurgence of rye.

Today bourbon is made all over the country. Most American whiskey is still made in Kentucky and Tennessee, and most of the growth in whiskey distilling capacity in the last decade or two has been there as well. Again it would be a guess, but if you said 95% of American whiskey is produced in that region, you’d be close to right. That region, which includes MGP’s distillery on the Kentucky-Indiana border, is America’s whiskey heartland.

With the resurgence of rye, American distillers are now making a lot of whiskey that is not in the bourbon/Tennessee whiskey style. In Scotland, they make many different whiskies, but they are all scotch. Not all American whiskey is bourbon, even with Jack and George included. In addition to bourbon and Tennessee whiskey, America’s whiskey-makers make rye whiskey, wheat whiskey, malt whiskey, corn whiskey, and blended whiskey, just to name the major types. Increasingly, these other whiskey styles are made in other places. Some craft producers have eschewed bourbon because of its strong association with Kentucky. Pennsylvania, New York, Virginia, and Maryland all have historical associations with rye whiskey, as does Canada.

Remember, the only thing that distinguishes bourbon from, say, rye is the mash bill. Both types use new, charred oak barrels and taste very similar. The parallel to scotch isn’t bourbon, it’s American whiskey writ large.

Back to the Kentucky question. The problem, of course, is with the KDA itself. They claim, also on their web site, that they are “Responsible for Promoting and Protecting All Things Bourbon,” but that’s not true. They actually only care about “promoting and protecting” the bourbon made in Kentucky by their member companies.

About 70% of the whiskey made in the U.S. is made by four outfits. One of the four, Sazerac, is not a KDA member. Sazerac makes bourbon in Kentucky at Barton 1792 in Bardstown and Buffalo Trace in Frankfort. They are one of the largest producers of Kentucky bourbon but the KDA acts like they don’t exist.

Do Brown-Forman and Diageo, which owns George Dickel, support the KDA’s Kentucky-centricity? Apparently they do. Since both companies also make Kentucky bourbon, and Brown-Forman is Kentucky-based, they happily support the hegemony of Kentucky’s large, legacy whiskey-makers. It’s a not-too-subtle barrier to entry for producers of Texas bourbon or anyone else who would like to expand out of a successful regional market.

In general, false and misleading statements invariably lead to false beliefs. Decisions based on bad information are themselves usually flawed. False and misleading statements erode our trust in the institutions that make them and in institutions generally. It shouldn’t surprise anyone that most trade organizations are really private clubs intended to promote and protect the interests of their members, certainly not the interests of the public or even, necessarily, their industry at large. In this case, people repeat the 95% claim like it’s gospel. It contributes to the hard-to-kill myth that bourbon can only be made in Kentucky.

They could fix this one, little problem easily. When you say “95%,” it sounds like you actually know it’s 95% because you’ve used a number and numbers imply precision. Maybe it would be better to just say “most” and leave it at that.

Bigger picture, this is part of a larger problem in which too many people feel free to pick and choose the “facts” that most appeal to them. There are still ways to find out what is true and what is not. You’re using the most powerful of them right now (by which I mean the internet, not this blog). But you have to be smart about it, you might have to do a little more work than you’d like. Most of all you have to care about basing your judgments upon accurate information. The truth, like Tinkerbell, will die if you stop believing in it. Care about the truth, both in what you take in, and what you put out. It’s the best way to live.

That’s true in whiskey, in politics, in life.