Bottled between 1763 and 1803, what’s said to be the oldest known whiskey currently in existence is coming up for auction this summer.

The Old Ingledew Whiskey is reported to have been purchased by financier John Pierpoint Morgan during one of his frequent visits to Georgia, where it was bottled by Evans & Ragland, grocers and merchants, in La Grange. His son, Jack Morgan, gifted this bottle to James Byrnes of South Carolina for Christmas, c. 1942-1944. It is thought to be the only surviving bottle of a trio from the cellar of J.P. Morgan, according to information from Skinner Auctioneers, who will be handling the auction. 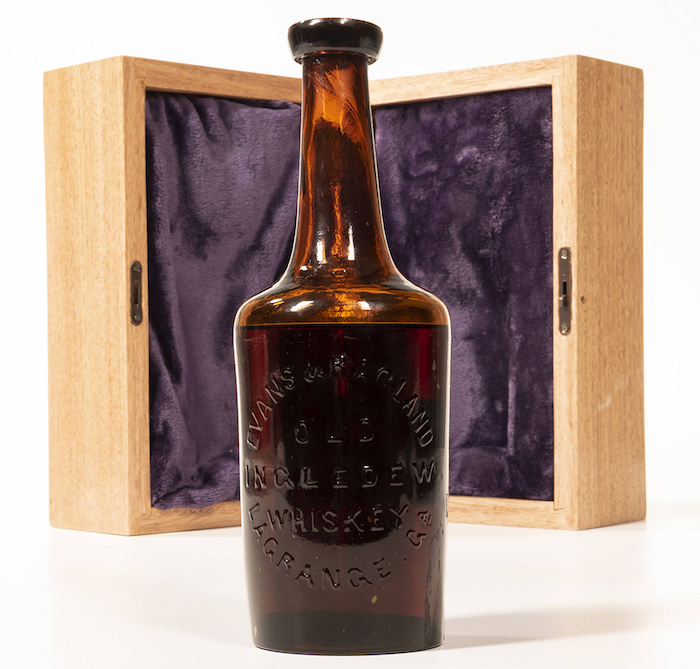 Byrnes had been a US Congressman, US Senator and Supreme Court Justice before WWII. When the US entered the war in 1942, Byrnes resigned from the court at the behest of President Franklin D. Roosevelt to become Director of War Mobilization. Upon Roosevelt’s death in 1945, he was appointed Secretary of State by Harry S. Truman. After leaving the Cabinet in 1947, Byrnes moved back to South Carolina and ran for governor, which he served from 1951-55. Once leaving office, Byrnes gifted the bottle to close friend and neighbor Francis Drake. Drake and his descendants safeguarded the bottle for three generations.

It is said by Skinner officials that “carbon 14 dating conducted in 2021 in collaboration with the University of Georgia indicates, with the highest probability, that the whiskey was produced between 1762-1802. The raw data was subsequently evaluated by the University of Glasgow and determined to be Bourbon with an 81.1% probability of being produced between 1763-1803, which places it in the historical context of The Revolutionary War of the 1770s and the Whiskey Rebellion of the 1790s.”

“We assess that the whiskey was produced circa the late 1700s. Standard practice was to store spirits in large glass demijohns after being aged in oak barrels.”