The Old Forester American whiskey brand, over the last couple years, has been releasing a series of bourbons designed to showcase the evolution of its whiskey making history as part of the Brown-Forman family. First started in 2014, the Whiskey Row series is now set to be wrapped up with word of 1910 Old Fine Whisky, a mature bourbon finished in a lightly toasted, heavily charred barrel.

Old Forester 1910 Old Fine Whisky, according to those behind it, is said to represent “a specific point in Old Forester’s nearly 150-year-old history. In October 1910, a fire caused the bottling line to be shut down for an indefinite period of time. Complicating matters, there was a vat of mature whisky waiting to be bottled. Otherwise facing ruin, this whisky was instead stored in new, charred oak containers to rest until the line could be repaired. The resulting product, the first documented double-barreled whisky, was both different from Old Forester and remarkable enough to become an entirely new expression – Very Old Fine Whiskey.” 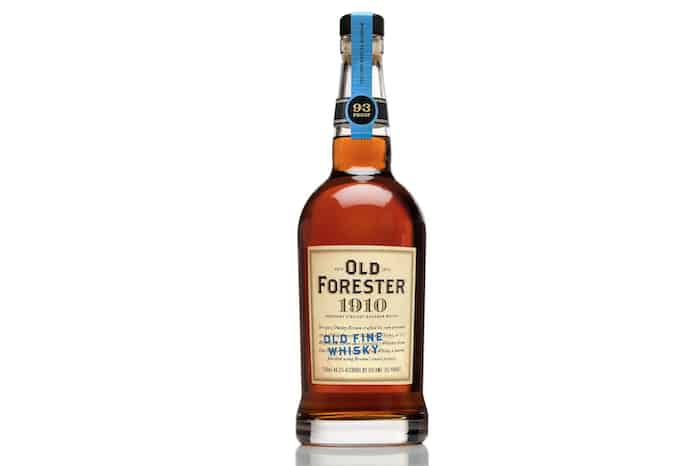 In order to simulate this expression, the distilling team at Old Forester took mature bourbon from their inventory and had it undergone a second barreling in a lightly toasted, heavily charred barrel. It was then bottled at 93 proof.

“There are often pieces of our brand’s history that we happen upon by accident,” said Chris Morris, Master Distiller, VP Whiskey Innovation, Brown-Forman, in a prepared statement. “Years ago, while searching through archives, we discovered a case of bourbon with a label I hadn’t seen before. We uncovered that Very Old Fine Whisky not only carried a great story, but a previously unknown heritage of double-barreled expressions.”

“Mature Old Forester enters a second barrel at 100 proof, just as it did in 1910,” added Old Forester Master Taster Jackie Zykan. “The second barrel is charred nearly to the point of incineration. This low entry proof allows more of the wood’s sugars to be dissolved into the whiskey, resulting in a smooth, sweet whisky with a clean, spicy finish – yielding an exceptional character.”

The resulting Old Forester 1910 Fine Whisky is set to be available this month for a pricing point of around $55 per 750 ml bottle, and you’ll find official tasting notes below for your consideration.